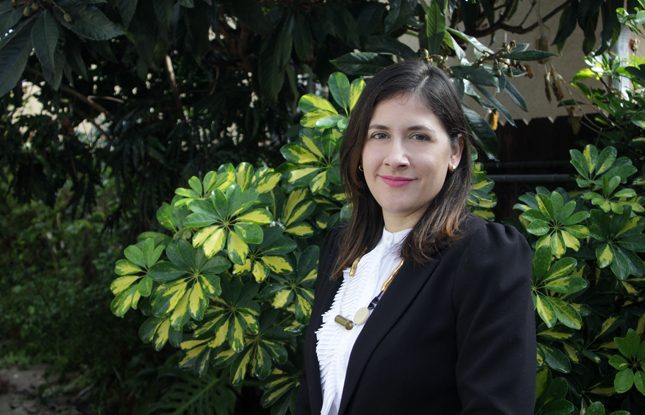 Art history alum Marcela Guerrero champions Latinx artists and advocates for accessibility in her curatorial role at the Whitney.

“Art translates the world around us in ways that no other profession or skill can do,” says Marcela Guerrero. “Great art can also anticipate the direction in which humanity is moving.”

As an assistant curator at one of the country’s top museums, Guerrero adds insight to the process of choosing which artists will featured, as well as how their work will be represented in exhibitions.

Guerrero was born and raised in Puerto Rico and earned her master’s degree and Ph.D. in art history, with a specialization in Caribbean art, at UW-Madison. In April, she joined the curatorial team at the Whitney Museum of American Art in New York City, where she has played a role in organizing an exhibition and in thinking about accessibility for visitors of many different backgrounds.

“I am working with others in the museum to think at an institutional level about issues of translation and how to better serve people for whom accessing art in a language besides English is an important and even necessary way of interfacing with the museum,” she says.

Guerrero started her career as a research coordinator at the International Center for the Arts of the America at the Museum of Fine Arts, Houston. She later joined the Hammer Museum in Los Angeles as a curatorial fellow, working on the major exhibition Radical Women: Latin American Art, 1960-1985.

“I learned the ropes of organizing an exhibition from conception to production,” she says.

“When I went on a curatorial trip to Brazil, I did an Instagram takeover,” she says. “For the last Made in LA biennial in 2016, I delivered a Facebook Live talk in English and Spanish. And I participated three years in a row in Twitter’s international #AskACurator day.”

No matter the place or platform, what excites Guerrero most about the work she does is the feeling that a coalition is building around Latinx art.

“While artists and curators are still working in discrete regions, it feels like we’re all in one conversation, celebrating the shows our peers are organizing, sharing contacts and showing artists from one city in another,” she says.

“It is not so much a mark that I would like to leave in the art world,” she says. “I would be happy to just push the art world, at least in the U.S., to be more of a reflection of the people who are right outside the steps of our institutions.”