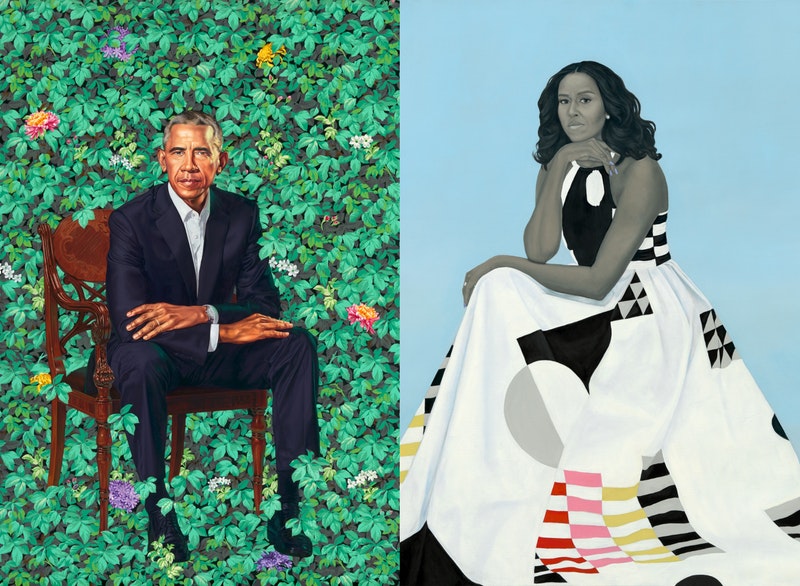 Free, registration required
Artists Kehinde Wiley and Amy Sherald discuss their celebrated portraits of President Barack Obama and former First Lady Michelle Obama and the opening of The Obama Portraits tour. They are joined by James Rondeau, President and Eloise W. Martin Director, and Jordan Carter, associate curator of Modern and Contemporary Art.
On loan from the Smithsonian’s National Portrait Gallery, the Obama portraits come to Art Institute of Chicago for the first stop of a five-city tour. As the family’s longtime home, Chicago has a unique connection to the Obamas, as does the Art Institute.
REGISTER—https://bit.ly/3c18zX3
ABOUT THE ARTISTS
Kehinde Wiley
Los Angeles native and New York-based visual artist Kehinde Wiley is an American artist best known for his portraits that render people of color in the traditional settings of Old Master paintings. Wiley’s work brings art history face-to-face with contemporary culture, using the visual rhetoric of the heroic, the powerful, the majestic, and the sublime to celebrate Black and brown people the artist has met throughout the world. Working in the mediums of painting, sculpture, and video, Wiley’s portraits challenge and reorient art historical narratives, awakening complex issues that many would prefer remain muted.
In 2018 Wiley became the first African American artist to paint an official United States presidential portrait for the Smithsonian National Portrait Gallery. Former President Barack Obama selected Wiley for this honor. In 2019 Wiley founded Black Rock Senegal, a multidisciplinary artist-in-residence program that invites artists from around the world to live and create work in Dakar, Senegal.
Wiley is the recipient of the U.S. Department of State’s Medal of Arts, Harvard University’s W.E.B. Du Bois Medal, and France’s distinction of Knight of the Order of Arts and Letters. He holds a BFA from the San Francisco Art Institute, an MFA from Yale University, and an honorary doctorate from the Rhode Island School of Design. He has held solo exhibitions throughout the United States and internationally and his works are included in the collections of over 50 public institutions around the world. He lives and works between Beijing, Dakar, and New York.
Amy Sherald
Born in 1973 in Columbus, Georgia, and now based in Jersey City, New Jersey, Amy Sherald documents contemporary African American experience in the United States through arresting, otherworldly figurative paintings.
Sherald engages with the history of photography and portraiture to tease out unexpected narratives, inviting viewers to participate in a more complex debate about accepted notions of race and representation, and to situate Black heritage centrally in American art.
Sherald received her MFA in painting from Maryland Institute College of Art and BA in painting from Clark-Atlanta University. Sherald was the first woman and first African American to ever receive the grand prize in the 2016 Outwin Boochever Portrait Competition from the National Portrait Gallery in Washington, DC; she also received the 2017 Anonymous Was A Woman Award and the 2019 Smithsonian Ingenuity Award. Sherald’s work is held in public collections such as the Crystal Bridges Museum of American Art, Bentonville, AR; the Museum of Contemporary Art, Los Angeles, CA; the Baltimore Museum of Art, Baltimore, MD; Embassy of the United States, Dakar, Senegal; Smithsonian National Museum of African American History and Culture, Washington, DC; Smithsonian National Portrait Gallery, Washington, DC; and Nasher Museum of Art, Durham, NC.
This program will be livestreamed on YouTube and you will receive the event link when you register. We recommend using a laptop or desktop computer to enjoy this program.
If you have any questions about virtual programming, please reach out to museum-programs@artic.edu.
Closed captioning will be available for this program. For questions related to accessibility accommodations, please email access@artic.edu.
Image: (Left) Kehinde Wiley. Photo by Tony Powell; (Right) Amy Sherald. Photo by JJ Geiger.
https://www.artic.edu/…/virtual-conversation-the-obama…
+ Google Calendar+ iCal Export