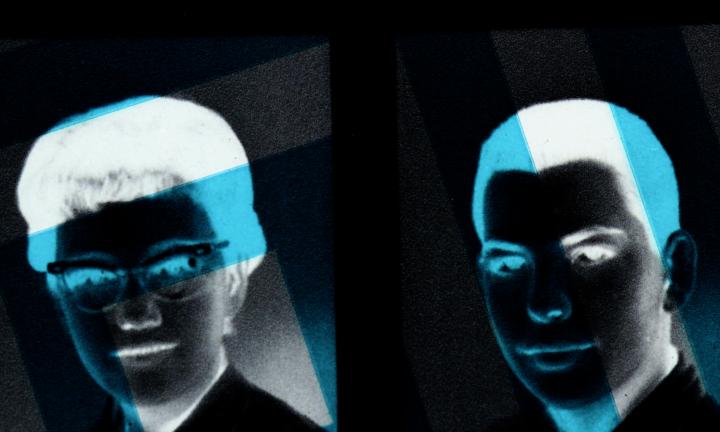 Join the Arts + Literature Laboratory for a program of short experimental films and videos from the Cosmic Rays Film Festival Tour on Wednesday, December 14 at 7:00 p.m. Admission $5.00, free for ALL members. Seating is limited, and doors open at 6:30 p.m. A $1 fee will be added for single admission credit card charges, but no fee for multiple admissions ($10 or more).
The Cosmic Rays Film Festival, founded by filmmakers Sabine Gruffat and Bill Brown in Chapel Hill, North Carolina, is an annual celebration of short films that expand our idea of what film is and what it can be.
Mills Folly Microcinema will present one of their touring programs, Look and Learn, a selection of films that investigate the nature of vision and visuality. The program foregrounds the materiality of the image, featuring work that makes innovative use of found footage, archival documents, scientific imaging, new media, drones, and celluloid. These films ask us to consider how the visual world is historically, technologically, and sensorially structured. Curated by John Winn, the program running time is 73 minutes.
Look and Learn | Janie Geiser | 2017 | 11 minutes
Look and Learn excavates the visual vocabulary we use to operate and construct our daily world. Look and Learn investigates a range of material image forms: elementary school books, visual instructions (furniture assembly diagrams, how-to manuals, safety instructions, maps) and photographs—with a focus on 1950’s era school class photographs, images from photography manuals, and others.
Another Horizon | Stephanie Barber | 2020 | 9 minutes
When I was twenty, I lived in Richard and his wife Mary’s apartment, the site of their voodoo spiritual temple in New Orleans. Of course, as priests and priestesses, Richard and Mary spoke often of death, transcendence, ethics and health. Our days were slow and filled with philosophical rumination. Richard a brilliant old man schooling a young wandering wonderer.
Are You Tired of Forever ? | Caitlin Craggs | 2017 | 6 minutes
A surreal montage of selfdom in a lensed world. We start in transit and end in the boudoir. Tea and light snacks will be served.
The Glass Note | Mary Helena Clark | 2018 | 9 minutes
In The Glass Note, a collage of sound, image, and text explore cinema’s inherent ventriloquism. Across surface and form, the video reflects on voice, embodiment, and fetish through the commingling of sound and image.
Sky Room | Marianna Milhorat | 2017 | 5 minutes
Someone is missing. Plants grow, but at what cost? Technology threatens and seduces as humans attempt to solve a mystery through telepathy and mirrors. Stainless steel and broken glass strewn about an intergalactic discotheque. Commissioned by the Chicago Film Archives and made in collaboration with sound artist Brian Kirkbride, with footage and sound from the archive chopped, manipulated and arpeggiated into a fertile mix of anthem and narrative.
The Air of the Earth in Your Lungs | Ross Meckfessel | 2018 | 11 minutes
Drones and GoPros survey the land while users roam digital forests, oceans, and lakes. Those clouds look compressed. That tree looks pixelated. A landscape film for the 21st century.
Please Step Out of Frame | Karissa Hahn | 2018 | 4 minutes
from your desk(top) mistrust the manufactured image distrust the assembled picture give no credence to the massed account discredit the aggregate narrative defame the corporate chronicle denigrate the collective annals doubt the constructed copy – consider the clone. accept the dismantled vision exalt the forged now brain subscribe to the ditto fuel the doodad delusion nourish the gizmo nightmare incite the idiot box prophecy inflame the dingbat phantasm a film burn becoming pixels as band-aid a manufactured reinforcement in the empire of computer and you feeding machine-vision the partition of screen
khôra | Caroline Key | 2019 | 7 minutes
An incursion into Medicine, specifically gynecology, exposing problem origins and fraught desires.
Void Vision | Alexander Stewart | 2018 | 8 minutes
In Void Vision the real and the simulated are equally constructions; a space where doubles, twins, duplicates, re-creations, and copies blend into one another. Void Vision combines a science-fiction sensibility with the aesthetic of early CG animation experiments. Rotating arrangements of lasers and duplicated women fade in and out onscreen, appearing as both photographed scenes and CG-modeled recreations. The audio track, incorporating text from Philip K. Dick’s VALIS, features an improvised electronic score and a voice espousing theories about the mind and the universe. Void Vision presents a consideration and re-consideration of reality; a cold fever-dream of paranoia and reification.
Mills Folly Microcinema is funded in part by grants from Dane Arts and the Madison Arts Commission, with additional funds from the Wisconsin Arts Board.