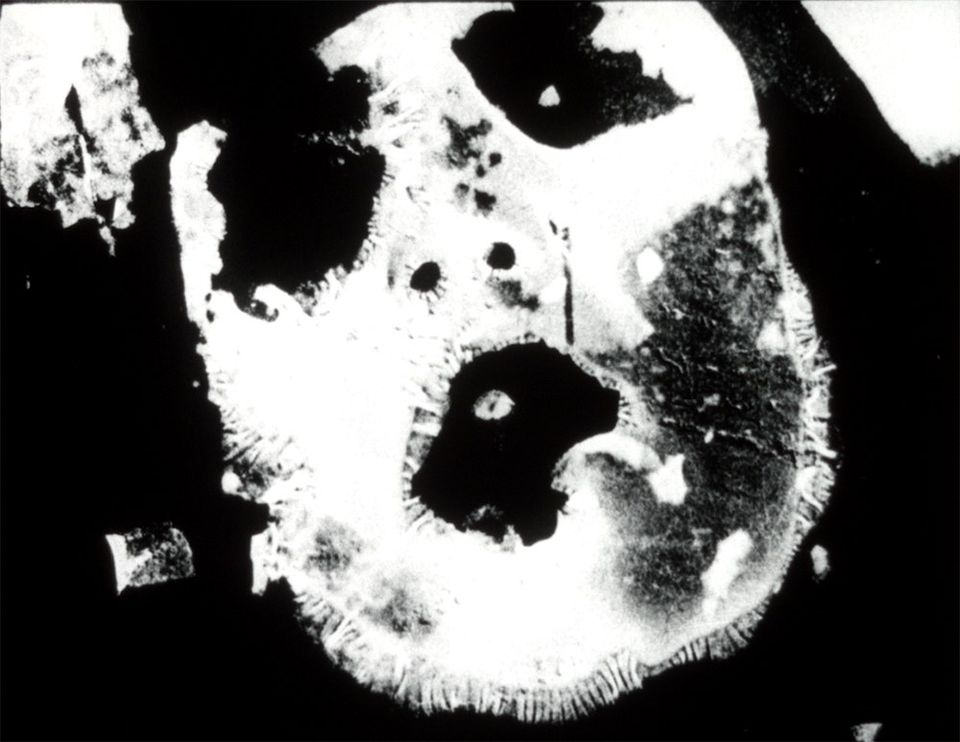 Join the Arts + Literature Laboratory for an evening of experimental films on Wednesday, August 24, at 8:00 p.m. (Please note later start, closer to sunset.) Admission $5.00, free for ALL members. Seating is limited, and doors open at 7:30 p.m. A $1 fee will be added for single admission credit card charges, but no fee for multiple admissions ($10 or more).
Potamkin | Stephen Broomer | Canada | 2017 | 67 minutes
In 1933, at age 33, Harry Alan Potamkin died of complications related to starvation, at a time when he was one of the world’s most respected film critics. In his writings, he advocated for a cinema that would simultaneously embrace the fractures and polyphony of modern life and the equitable social vision of left radical politics. This film-biography is assembled out of distorted fragments of films on which he had written, an impression of erupting consciousness.
At the Odessa steps, trampling gives breath to the child. The bullet miraculously reforms the face. The Cossacks march backwards, retreating unseen into their nothing, the unfired rounds of their rifles restored to their menacing potential. Feet tread backward up the steps as the steps themselves collapse in splintering emulsion. The carriage is set upright.
“Describing Potamkin as a ‘biopic’ would be a mistake: the Broomer film is first and foremost a hypothesis. This is because the goal is not to tell the life of the critic, but to describe a matrix of thought, his way of seeing the world and particularly his way of seeing cinema. The inevitability of time has only left traces of that matrix in Potamkin’s written word, in his articles and film reviews. Then, Broomer uses the written material to elaborate his thesis, but decides to develop it audiovisually from the works that were the trigger of the criticism and cinematographic theory of Potamkin.” -Damian Bender, Cinedivergente
Stephen Broomer (https://www.stephenbroomer.com/) is a filmmaker, film preservationist, historian, educator, programmer and publisher. Broomer’s 16mm films and digital videos have screened at festivals such as the San Francisco Cinematheque’s Crossroads Festival, the Toronto International Film Festival, S8 Mostra de Cinema Periférico (Galicia), and the New York Film Festival, and he has presented solo programs at venues such as Anthology Film Archives (New York), the Canadian Film Institute, the Pleasure Dome (Toronto), and the MassArt Film Society (Boston). In 2014, Broomer’s films and videos were the subject of a book-length collection of essays published by the Canadian Film Institute, The Transformable Moment: The Films of Stephen Broomer.
Potamkin will be preceded by the following short films.
To Live and Die in the Shadows: Meditations on Ferns, Survival, and Horizontal Gene Transfer | Shannon Silva | USA | 2021 | 6 minutes
180 million years ago, through a chance horizontal gene transfer, ferns acquired a much needed light sensor (neochrome) that allowed them to modify and survive in low light environments. We should all be so lucky.
Shannon Silva (https://www.shannonsilvafilms.com/) is a multi-modal filmmaker and an Associate Professor of Film Studies at the University of North Carolina Wilmington. Her films have screened at festivals internationally including: Atlanta Underground, London Short Film Festival, Melbourne Underground, Cucalorus, Docutah, Indie Grits, Sidewalk Film Festival, St. John’s International Women’s Film Festival, and more.
The day lives briefly unscented | Brandon Wilson | USA | 2021 | 5 minutes
A film about ancestry, transformation and loss. Each shot was created by covering and uncovering the lens with the hand. The footage was then arranged in a layered sequence so that images interact as they appear and disappear.
Brandon Wilson (https://brandonfwilson.com/) grew up in the deserts of west Texas. He studied photography and painting and received a BA in studio arts from the University of Texas in Austin. He lives in a small cabin in the woods of northwest Oregon and has been making films since 2014.
ABOUT MILLS FOLLY MICROCINEMA
Mills Folly Microcinema showcases nationally recognized experimental film and video art work from the festival and microcinema circuit. We network with regional filmmakers and organizations to bring filmmakers and guest programmers to Madison for screenings. And we incubate local experimental filmmaking by providing screen time at Project Projection events.
Mills Folly Microcinema is funded in part by grants from Dane Arts and the Madison Arts Commission, with additional funds from the Wisconsin Arts Board.