The Courtauld: The Shop Girl in Movies and Fine Art 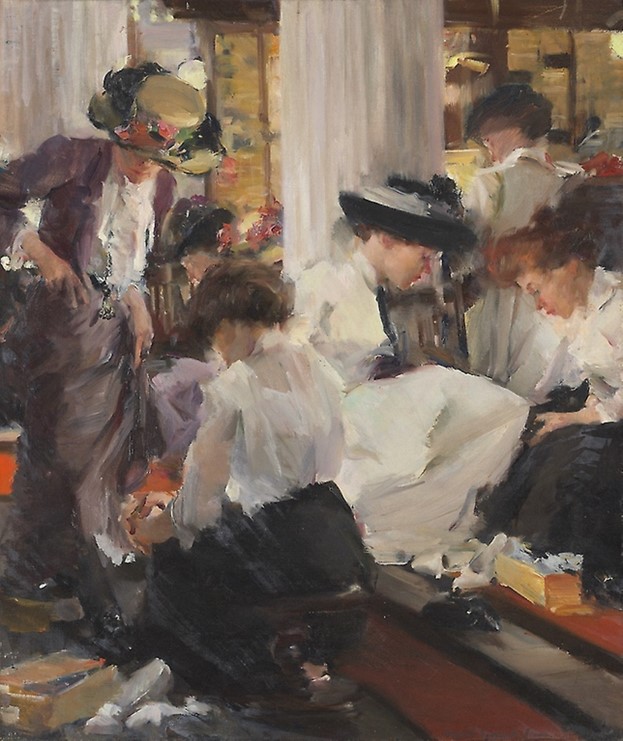 “The Moving Image as Subject and Practice in American Art, 1900-1990”
Film and Television were the most popular artforms of the 20th century in America. Their cultural influence was felt across spheres as diverse as politics, fashion, design and publishing. Notwithstanding the wealth of academic discourse on the cultural, industrial and social history of the moving image in relation to these and other fields there still remains much work to be done on how American artists figured film and television as both distinct subjects and tools for the creation of artworks. This lecture series will present a varied roster of talks that will examine the moving image as both subject and practice in American art. We will explore a diversity of periods, artists and approaches to both film and television, observing the Art History of the moving image from an interdisciplinary perspective.
Session 2: Katherine Manthorne, “The Shop Girl in Movies and Fine Art”
Elizabeth Sparhawk-Jones (1885–1968) established her reputation depicting working class women — especially shop girls– in paintings like Shoe Shop (1911). Lois Weber (1879–1939) was a leading silent filmmaker whose Shoes (1916) follows five and dime clerk Eva Meyer. Unable to afford decent footwear, Eva succumbed to male advances and “sold out for a pair of shoes.” Examining the shared focus of painter and filmmaker on the young, single women flooding the labour force, this paper analyses visual strategies they formulated to convey experiences of labour and longing from the perspective of their female protagonists.
Katherine Manthorne lectures and publishes widely on the Art-Film dynamic including Film and Modern American Art: The Dialogue Between Cinema and Painting (New York & London: Routledge, 2019; paperback, 2020) and several related essays: “Mexican Muralism and Moving Pictures,” “John Sloan’s Cinematic Eye,” “Experiencing Nature in Early Film: Dialogues with Church’s Niagara and Homer’s Seascapes,” “John Sloan, Moving Pictures, and Celtic Spirits,” and “Made in New Mexico: Modern Art & the Movies.” She teaches art history at the Graduate Center, City University of New York.
Frances Fowle is Chair of Nineteenth-Century Art at the University of Edinburgh and Senior Curator at the National Galleries of Scotland. She has curated numerous exhibitions on late nineteenth and early twentieth-century art, including American Impressionism: A New Vision in 2014. She recently published an essay on Cosmopolitanism and the Gilded Age for the Terra Foundation for American Art and is curating a forthcoming exhibition on George Bellows and the Ashcan School. She will be a respondent to Professor Manthorne’s paper at this event.
Organised by Dr Tom Day – Terra Foundation Postdoctoral Fellow, Centre for American Art, The Courtauld
Book a free ticket: https://www.eventbrite.co.uk/e/the-shop-girl-in-movies-and-fine-art-tickets-130025673289?fbclid=IwAR0-ioJlth0TQ6w95JUa4ylfBRfBCotzOGCPbTsW2G7nyXd2HVjGSthVeko
+ Google Calendar+ iCal Export