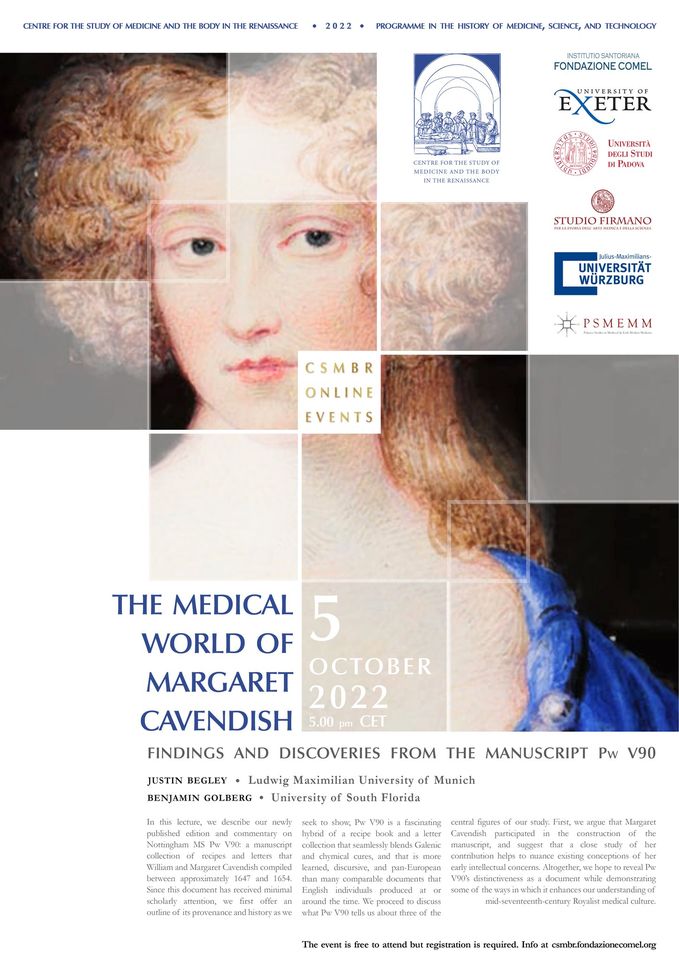 “THE MEDICAL WORLD OF MARGARET CAVENDISH. Findings and Discoveries from the Mansuscript Pw V90”

In this lecture, we describe our newly published edition and commentary on Nottingham MS Pw V90: a manuscript collection of recipes and letters that William and Margaret Cavendish compiled between approximately 1647 and 1654. Since this document has received minimal scholarly attention, we first offer an outline of its provenance and history as we have reconstructed it, and provide a brief overview of its contents, the kinds of recipes that it contains, and other relevant facets of its subject matter.
As we seek to show, Pw V90 is a fascinating hybrid of a recipe book and a letter collection that seamlessly blends Galenic and chymical cures, and that is more learned, discursive, and pan-European than many comparable documents that English individuals produced at or around the time.
We proceed to discuss what Pw V90 tells us about three of the central figures of our study. First, we argue that Margaret Cavendish participated in the construction of the manuscript, and suggest that a close study of her contribution helps to nuance existing conceptions of her early intellectual concerns.
We then turn to two figures who provided the Cavendishes with extensive advice: Théodore de Mayerne and Kenelm Digby. Regarding Mayerne, we reveal that he was the inventor of the then-renowned anima hepatis or salt of steel, which, we contend, is an embodiment of his attempt to unify Galenic and chymical medicine.
We subsequently turn to Digby’s viper powder, which is an intermediate and hitherto unknown link between his viper wine and powder of sympathy, and which he advertised through the deployment of complex rhetorical constructions.
All told, we hope to reveal Pw V90’s distinctiveness as a document while demonstrating some of the ways in which it enhances our understanding of mid-seventeenth-century Royalist medical culture.