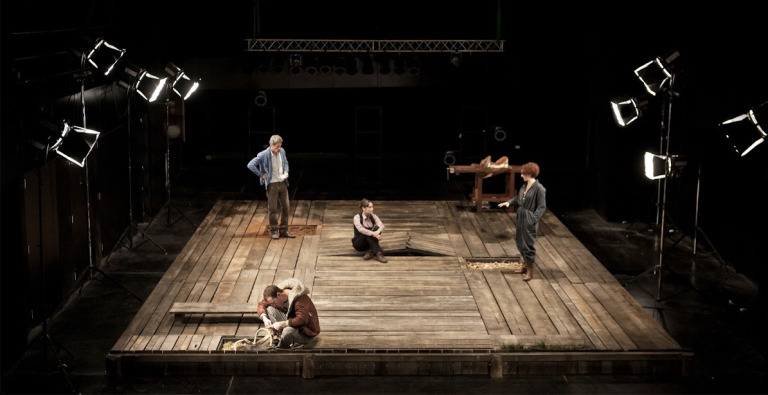 I began acting in theater and in film, and writing fiction. Then I began to write plays and direct them. Together with a group of artists, I co-founded a theater company in Buenos Aires. I then went on to direct my first film, in which I also acted as protagonist. For years I have been working in all these areas: I was never any one of them. They mutually constitute one another. This talk is a journey through my work and a reflection on the specific procedures afforded by different languages — how and why an idea takes shape as narrative (the novel or short story), as theater, or as film. I will explore how doubt and uncertainty are engines for my choices and the work that emerges and the forms that it takes. And I will explore how producing fiction requires at once an intense inner concentration and receptivity to the world. In the words of Agnès Varda, “If we opened people up, we’d find landscapes.”

Romina Paula (Buenos Aires, 1979) is an Argentine novelist, playwright, actor, and film and theater director. Her plays Algo de ruido hace (2007), El tiempo todo entero (2009), and Fauna (2013), as well as her novels Agosto (2009) and Acá todavía (2016), have received critical acclaim across borders. As an actor, she has appeared in films such as Santiago Mitre’s The Student (2011), Matías Piñeiro’s The Princess of France (2014), and Mariano Llinás La Flor (2018). Her first film as a director, De nuevo otra vez [Again Once Again] (2019), was nominated for a Bright Future award at the International Film Festival Rotterdam and won the San Sebastian Film Festival Horizontes Award. Her current film project, Gente de noche, was recently selected by San Sebastian’s 9th Europe-Latin America Co-Production Forum. Her works explore the intertwinement of cultural forms and embodied experience by bringing together disparate languages, genres, and aesthetic traditions, including autobiography, poetry, folklore, pop music, and German romanticism.

Both events are free and open to the public. They are possible thanks to the generous financial support of the Anonymous Fund. The Center for Visual Cultures would also like to thank the Departments of Spanish and Portuguese; Art; Communication Arts; English; Interdisciplinary Theatre Studies; the Latin American, Caribbean, and Iberian Studies Program, the Institute for Research in the Humanities, and the Wisconsin Center for Film and Theater Research.