History Dept. | Palestine as Possibility: Polish Jews and the Yishuv as Fact in the 1930s 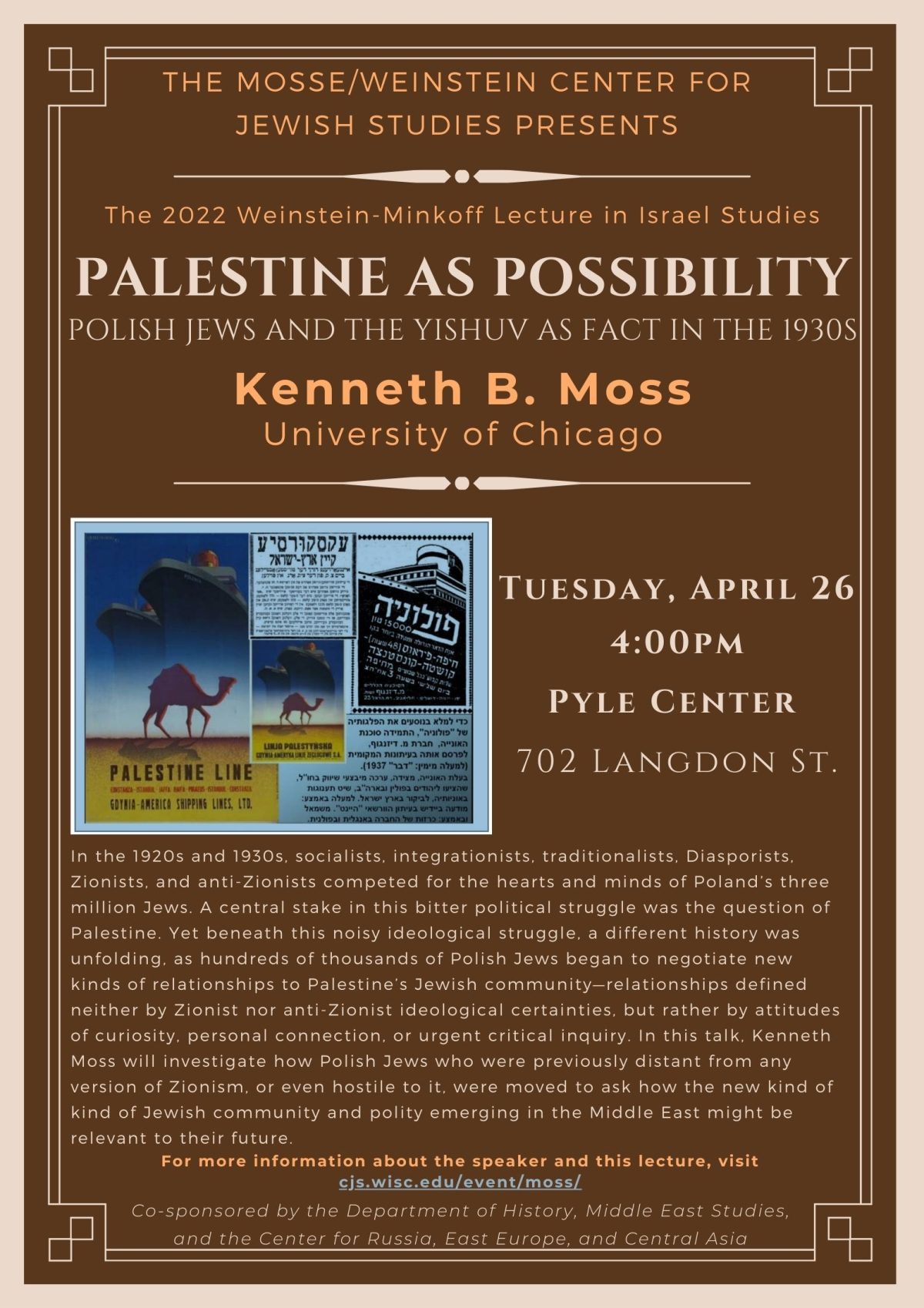 The 2022 Weinstein-Minkoff Lecture in Israel Studies
“Palestine as Possibility: Polish Jews and the Yishuv as Fact in the 1930s”
Kenneth B. Moss (Professor of Jewish History, The University of Chicago)
April 26, 2022 | 4:00pm | Pyle Center (702 Langdon St. Madison, WI)
About the lecture:
In the 1920s and 1930s, Diasporists, socialists, integrationists, traditionalists, and Zionists of every variety competed for the hearts and minds of Poland’s three million Jews. A central stake in this bitter political struggle was the question of Palestine: as nearly a dozen varieties of Zionism sought to inculcate their far-reaching visions of Jewish collective and individual self-transformation through nation-building in British Mandatory Palestine, anti-Zionist forces levelled equally far-reaching attacks on every aspect of the movement. Yet beneath this noisy ideological struggle, a different history was unfolding: beginning in the late 1920s, tens and eventually hundreds of thousands of Polish Jews began to negotiate new kinds of relationships to Palestine’s Jewish Yishuv defined neither by Zionist nor anti-Zionist ideological certainties but rather by attitudes of curiosity, personal connection, or – most interestingly — urgent critical inquiry as the situation in Europe worsened and Palestine’s Jewish Yishuv developed ever more rapidly. In this talk, Ken Moss will investigate how Polish Jews previously distant from any version of Zionism, or even hostile to it, were moved to ask about how the fact of a new kind of kind of Jewish community and polity emerging in the Middle East might be relevant to their future – or that of their children. He will focus both on changing attitudes toward young people in 1930s Poland and on penetrating and surprising Palestine travelogues by Diasporist critics of Zionism like Helena Khatskels, Yoysef Tshernikhov, and Max Weinreich to explore a form of Jewish thinking about Zionism and the Yishuv that began not from ideological commitment but from exigency, uncertainty, and an urgent sense of the need for empirical and predictive purchase in a crisis-ridden present.
About the speaker:
Kenneth B. Moss is the Harriet and Ulrich E. Meyer Professor of Jewish History at the University of Chicago. He is the author of Jewish Renaissance in the Russian Revolution (Harvard University Press, 2009), which received the Sami Rohr Prize for Jewish Literature, and An Unchosen People: Jewish Political Reckoning in Interwar Poland, which was supported by a Ryskamp Fellowship from the American Council of Learned Societies and which has just appeared from Harvard University Press. He is co-editor with Ben Nathans and Taro Tsurumi of From Europe’s East to the Middle East, which also appeared this year. With Israel Bartal, he is co-editing volume 7 of the Posen Library of Jewish Culture and Civilization: National Renaissance and International Horizons, 1880–1918 (Yale University Press, forthcoming). From 2014 to 2020, he coedited Jewish Social Studies. Formerly the Posen Professor of Modern Jewish History at the Johns Hopkins University, he has been a visiting scholar at Harvard’s Davis Center and at Penn’s CAJS.
Co-sponsored by Middle East Studies, the Center for Russia, East Europe, and Central Asia