IRH Lecture: “A Dance Genre For the People?: French and Soviet Folk Dance in the Global Cold War” 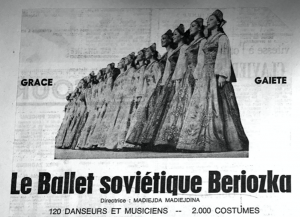 Monday Seminar: A Dance Genre For the People?: French and Soviet Folk Dance in the Global Cold War

After the death of Joseph Stalin in 1953, the Soviet Union unleashed a flurry of cultural ambassadors who were among the first Soviet citizens to experience life beyond the Cold War divide. Among the most renowned of these “ambassadors” were Soviet folk performers. The Moiseyev Folk Ensemble’s 1955 tour to Paris became the first Soviet company tour to France in the postwar period. To many onlookers, the dancers’ arrival in the West heralded a new era of openness and artistic exchange across the “iron curtain.” Yet even as audiences around the world applauded Soviet folk dance, French officials worried that communist folk companies had become agents of Soviet cultural and ideological influence. As Soviet folk performers began circuiting the globe, French diplomats, journalists, and choreographers advocated for the creation of a French folk troupe that could compete with a company like the Moiseyev Ensemble. Debates around folk tours revealed that folk performance communicated much more than the spectacle itself: this genre was meant to convey populist authenticity, respect for national minorities, and preservation of folk traditions. My research reveals that folk became a key battleground for cultural influence during the entangled events of the Cold War and decolonization. What precisely did “folk” mean, who did it represent, and why did the genre become such a powerful tool during the Cold War? Why did the Soviet Union appear more adept at mobilizing folk performance than its Western rivals, and how did France – a nation lauded for its historic dance school – rise to meet this challenge?

Kayci Olson Harris is a Ph.D. Candidate in European History (with a focus on French and Soviet History) in UW’s Department of History. She completed her B.A. in History and French at the University of Georgia in 2012. Her dissertation explores the intersections of dance aesthetics, populism, gender, and consumer culture through Franco-Soviet dance exchanges from 1953–75. Her work has been funded by the Fulbright Program, the Society for French Historical Studies, and the George L. Mosse Program at UW–Madison.