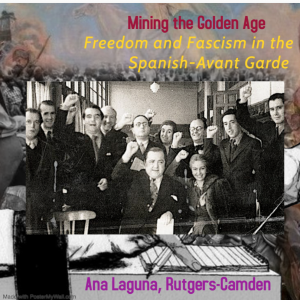 “Mining the Golden Age: Freedom and Fascism in the Spanish Avant-Garde”

Can poetry change the world? A country? A national (idea of) destiny?

Poetry, especially the avant-garde poetry of the 1920s and 1930s, is associated with radical, aesthetic experimentation and liberating paths of expression. In Spain, a pivotal influence for this formal experimentation was Baroque verse (the poetry of the 1600s), reintroduced in the Spanish scene through artists like Pablo Picasso, and poetic groups like the Generation of 1927. In the Spanish context, this Baroque reference peculiarly reenergized the synergistic relationship between word and image, tradition and innovation, aesthetic pleasure and civic mobilization that characterizes the vanguard.

Less known is the dark side of this movement that turned this experimental, artistic laboratory into a feeding ground for fascist thought and aesthetics. This presentation will explore two main questions raised by the conflicted legacy of this cultural crossroads: How could an experimental movement that embraced and fostered artistic freedom could end up breeding the authoritarian political and literary repression? And what role does poetry play in the cultural deterioration that leads to such political radicalization?

The recognition of the deep ideological and aesthetic frictions that pervade this chapter of Spanish political and poetic history casts into doubt the assumed conservatism of Golden Age culture and its reappraisals. Ultimately, this project illustrates how complex and conflicted was the interpretation of a poetic, Golden Age legacy in the 1920s and 30s, and asks the field of Spanish Studies to recognize a more balanced understanding of both the modern and early modern periods.

Ana María Laguna holds a Ph.D. in Comparative Literature (Purdue 2002). Her research on the culture of sixteenth- and seventeenth-century Spain explores the relationship among literature, politics, and the visual arts, focusing on how literature reflects prominent artistic and socio-political anxieties. She is the author of Cervantes and the Pictorial Imagination (Bucknell University Press, 2009) and co-editor of the collected volume Goodbye Eros: Recasting Forms and Norms of Love in the Age of Cervantes (Toronto University Press, forthcoming in 2020). Her articles have repeatedly appeared in the top journals in her field, including Hispanic Review, MLN, and Revista Hispánica Moderna, and her essays have been selected as chapters for in various edited collections. As a comparatist critic, she relates visual and verbal domains, multiple national traditions, and disparate chronologies, producing scholarship that introduces new focal points, fertilizes interdisciplinary thought, and expands the scope and impact of Spanish literary study. She has been awarded fellowships by the National Endowment for the Humanities, the Folger Institute, and the Program for Cultural Cooperation Between the Ministry of Culture of Spain and United States Universities, among others. She is a nationally-elected executive member of the Cervantes Society of America.