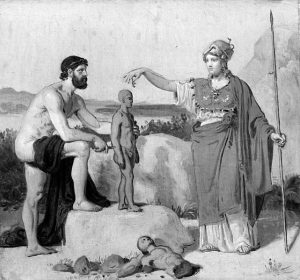 In the final extant letter of Epistulae Morales, Seneca the Younger attributes the human good to the work of cura, “care” or “concern,” before abruptly discussing how humans, unique among animals, have access to future time. I argue that Seneca’s distinctively positive conception of temporalized cura provides the pedagogical structure for the work and unites his assertions across the traditional areas of philosophy. While other studies have focused on and responded to the social aesthetics and asceticism of the “care of the self,” following Foucault’s famous formulation, I seek to demonstrate how Seneca draws specifically on Roman culture and myth in the figuration of cura. Seneca’s language draws on the myth of the personified Cura, whom the Latin mythographer Hyginus records as the creator of humanity, who makes the first humans with her hands. In combining this story of divine handicraft with Stoic doctrines and methodology, Seneca deploys the metaphor of the hand of cura to portray how moral agents create happiness by aiming at the future or fall into the grasp of outside forces by fixating on the present.

Mason Wheelock-Johnson is a Ph.D. candidate in Classics at the University of Wisconsin, Madison. His general interests are in Imperial Latin literature; ancient philosophy, particularly Aristotelianism and Stoicism; labor and work in antiquity; critical theory; and medieval and modern reception of Greek and Roman texts. His dissertation explores the connection of cura, temporality, and hand imagery as a unifying thread in Seneca’s Epistulae Morales. Mason received his MA in Classics from UW – Madison, where he has taught courses in introductory Latin, Roman culture, and Ancient Mediterranean literature in the Department of Classical and Ancient Near Eastern Studies. He received his BA in both Greek & Roman Studies, with honors, and Philosophy from Rhodes College.