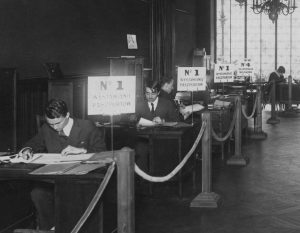 After the territory of Poland was divided between the Soviet Union and Nazi Germany in September 1939, the Polish state’s administrative apparatus continued to function through the government-in-exile, based first in France and then in London. In collaboration with the remnants of Poland’s interwar consular network, the government resumed the tasks of granting, removing, and revoking Polish citizenship in locations across the world, even in the midst of war. This talk explores why men and women, some of whom had never set foot on Polish territory, applied for Polish citizenship at their local consulate, and traces how state officials responded to their requests. An analysis of individual cases, including those related to “Poles of the Jewish nationality,” allows us to explore a series of questions whose relevance stretches far beyond the Polish case: Who dictated the criteria for the desirable citizen? What types of documents did officials value most when deciding on particular cases? And, more broadly, what did citizenship come to mean—for both state officials and applicants—in the absence of a territorial state?

Kathryn Ciancia Kathryn Ciancia is Associate Professor of History at the University of Wisconsin-Madison. Her first book, On Civilization’s Edge: A Polish Borderland in the Interwar World, is forthcoming with Oxford University Press in 2020. In it, she explores how an eclectic group of Poles—including health officials, urban planners, border guards, and state officials—sought to simultaneously “civilize” and “Polonize” a multiethnic borderland on the state’s eastern fringes. She has also published articles on Polish attempts to reduce the “Jewishness” of borderland towns (Journal of Modern History) and on the role of Polish national activists in the immediate aftermath of the First World War (Slavic Review).