IRH Lecture: “‘The Handsome Groom of Camberwell’ & a ‘Perhapser'” 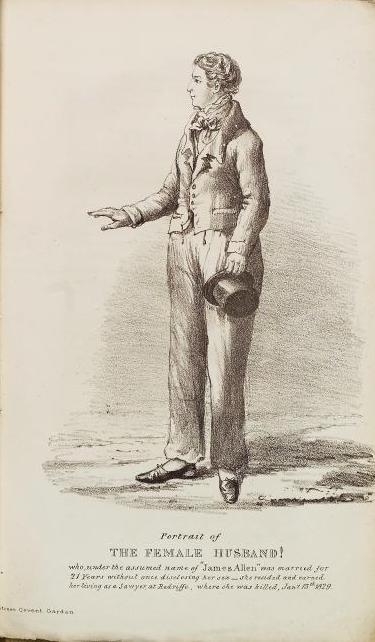 “The Handsome Groom of Camberwell” & a “Perhapser”: Trans Masculinity in Victorian Periodicals & Fiction

Though we tend to think of transgender people as a modern phenomenon, transgender studies has shown us that all sorts of people have moved between, across, and among genders since gender itself first existed. In considering this fundamental idea in the context of Victorian literary studies, this presentation will center on nineteenth-century trans masculinity via James Allen (1787-1829), one of the most well-known “female husbands” (assigned-female-at-birth people who lived and married as men), and would-be-female-husband Albert Nobbs, one of the character studies from George Moore’s Celibate Lives (1927).

As my readings of these transmasculine figures in the periodical press and fiction will demonstrate, Victorian gender ideologies and lived realities involved transgender phenomena that both confirmed the discreetness of the categories of man and woman, but also unsettled the impermeability of such boundaries as the discourse attempts to reconcile the masculinities of these figures with their assigned-at-birth sex. As such, these narratives illustrate the need for transgender studies’ thinking through the formation of gender itself to become a foundational part of Victorian studies.

Lisa Hager is an Associate Professor of English and Gender, Women’s, and Sexuality Studies at the University of Wisconsin-Milwaukee at Waukesha, where they direct the LGBTQIA Resource Center. Their current book project looks at the intersections of trans studies and Victorian studies, and they have published articles on Victorian sexology, the New Woman, aestheticism and decadence, steampunk, digital humanities, and trans and queer studies. Their article on “female husbands” was recently awarded the Surridge Prize for Best Article Published in Victorian Review and the North American Victorian Studies Association Donald Gray Prize for the Best Essay Published in the Field of Victorian Studies. In January 2021, they assumed editorship, along with their colleague Dr. Anna Maria Jones, of the academic journal Prose Studies: History, Theory, Criticism.