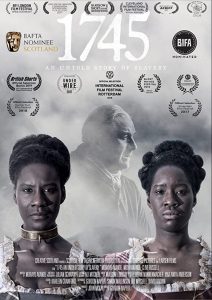 1745: An Untold Story of Slavery (2017) is a short film inspired in part by research by the Runaway Slaves in Britain project team (https://www.runaways.gla.ac.uk). Runaway slave advertisements in English and Scottish newspapers are often the only surviving records of these individuals, and it is difficult if not impossible to find out what happened to these freedom-seekers. Morayo and Moyo Akandé are among a number of playwrights, musical composers, writers and other cultural creators to have taken on the challenge of imagining backstories for such people. This short film was intended by the Akandés to make enough of a splash for them to secure funding to make a full-length feature film. Having won one award for the screenplay and another for the Best Short Film at the Africa International Film Festival they have succeeded, and had the health crisis not happened the film would have been made this year.

Simon Newman began his career writing about popular political culture and social history in the era of the American Revolution. For the past fifteen years, he has focused on the history of slavery in the British Atlantic World, publishing a book on the origins of the plantation labor system. He led a Leverhulme Trust funded project creating a database of runaway slave advertisements published in eighteenth-century Britain, and this research has resulted in collaborations with playwrights, musical composers, film-makers and a graphic novelist who are all interested in the presence of enslaved people in Georgian Britian.

Professor Newman is interested in digital humanities and the potential it has for new kinds of resources and publications in slavery history. In 2018 he published the William and Mary Quarterly‘s first born-digital article, and he is aiming to publish the research he completed at the Institute as an Open Access digital book.

Professor Newman has also helped initiate a report into the degree to which the University of Glasgow benefitted financially from Atlantic World racial slavery. Glasgow was the first British university to undertake such a study and to develop a program of reparative justice as a result.