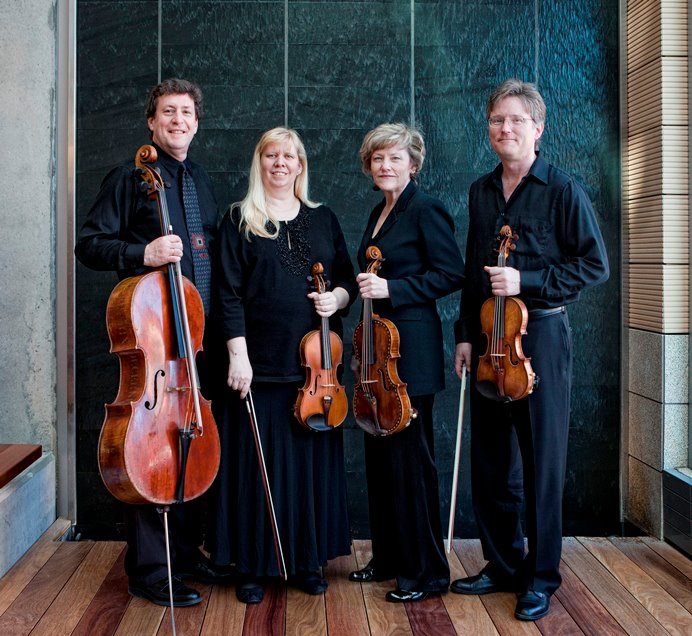 Streaming live at https://youtu.be/wQajNmutqgU
Pro Arte Quartet
Beethoven String Quartet Cycle, Program VI
Part of the Pro Arte Quartet’s yearlong retrospective of Beethoven’s quartets to celebrate the 250th anniversary of the composer’s birth.
David Perry, Violin
Suzanne Beia, Violin
Sally Chisholm, Viola
Parry Karp, Violoncello
Hamel Music Center I Mead Witter Foundation Concert Hall
No in-person attendance
……..
Beethoven String Quartet Cycle, Program VI
String Quartet in Bb Major, Op. 18 No. 6 (1798-1800)
String Quartet in F Major, Op 59 No. 1 (1808)
……..
The Pro Arte Quartet is one of the world’s most distinguished string quartets. Founded by conservatory students in Brussels in 1912, it became one of the most celebrated ensembles in Europe in the first half of the twentieth century and was named Court Quartet to the Queen of Belgium. Its world reputation blossomed in 1919 when the quartet began the first of many tours that enticed notable composers such as Milhaud, Honegger, Martin, and Casella to write new works for the ensemble. The Pro Arte Quartet performs throughout the United States, Europe, and Asia and continues to champion both standard repertoire and new music.
The group is an ensemble in residence at the Mead Witter School of Music and resident quartet of the Chazen Museum of Art. The quartet has performed at the White House and, during the centennial celebration, played for the King’s Counselor in Belgium. Recent projects include the complete quartets of Bartók and Shostakovich and, in collaboration with the Orion and Emerson String Quartets, the complete quartets of Beethoven. Regular chamber music collaborators that perform with Pro Arte include Samuel Rhodes, viola; Bonnie Hampton, cello; and Leon Fleischer and Christopher Taylor, piano. Together since 1995, the quartet have recorded works of Mendelssohn, Dvořák, Rhodes, Shapey, Sessions, Fennelly, Diesendruck, and the centennial commissions