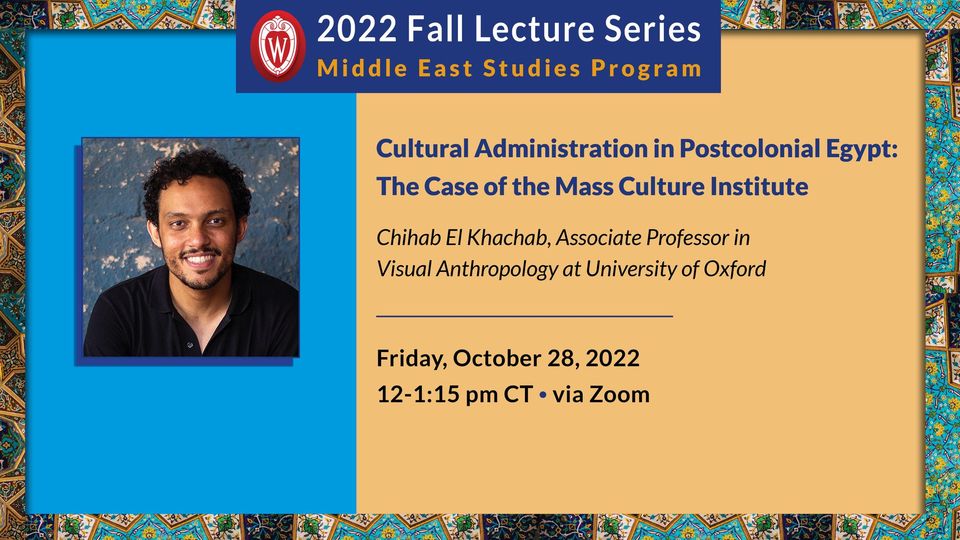 Cultural Administration in Postcolonial Egypt: The Case of the Mass Culture Institute

This talk examines everyday cultural administration in Nasser’s Egypt. Based on a wider historical and ethnographic study of the Ministry of Culture, El Khachab argues that low- and mid-ranking bureaucrats working in the cultural sector saw their task as a “mission” (risala) and a “responsibility” (mas’uliyya). The talk will focus on a specific administration within the Ministry of Culture: what was known as the Mass Culture Institute, which became the General Organization for Cultural Palaces (GOCP) in 1989. More than any other institution at the Ministry, the Mass Culture Institute embodied the developmental state project to bring “culture” to the countryside through its network of cultural palaces, its support for provincial theatre troupes and musicians, and its culture caravans travelling from village to village equipped with a library, a moving stage, audio equipment, and film projectors.
Dr. Chihab El Khachab is Associate Professor in Visual Anthropology at the University of Oxford. A social anthropologist specializing in visual and media anthropology, his work focuses on Egyptian media production and cultural institutions. He is the author of Making Film in Egypt: How Labor, Technology, and Mediation Shape the Industry (AUC Press, 2021), as well as a number of articles in Arab Media & Society, Middle East Critique, the Arab Studies Journal, and the Journal of the Royal Anthropological Institute. His current book project is a historical ethnography of the Egyptian Ministry of Culture.