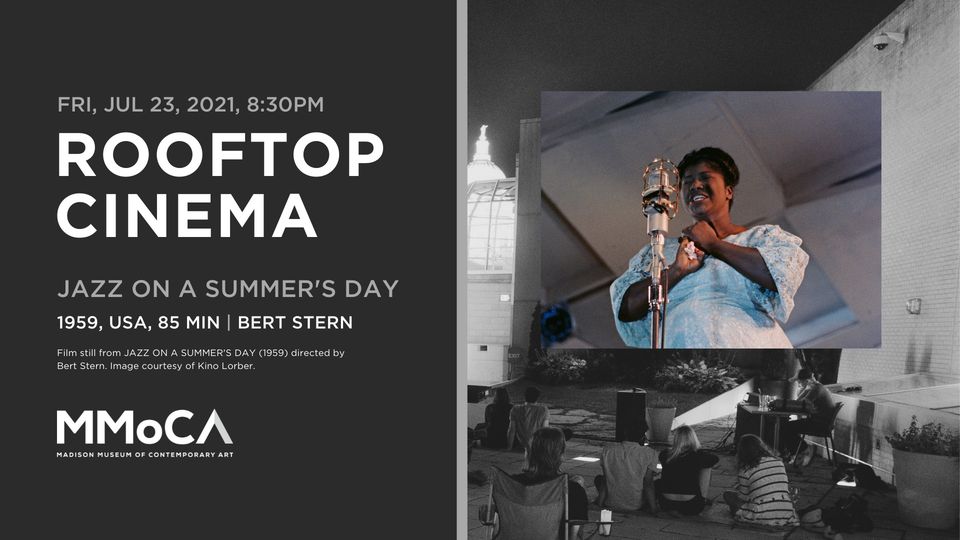 *Event capacities at MMoCA have been limited to allow ample room for social distancing between guests. Reserve advance tickets (free or paid) through Eventbrite to secure seating. A limited number of tickets will be made available for purchase night-of at the screening.
*Rooftop Cinema is $5 per screening, or free for MMoCA members and anyone age 21 and younger.
*Visit mmoca.org/rooftop-cinema to reserve tickets and for more information on the 2021 season.
ABOUT THE FILM
The 1959 classic is considered one of the most extraordinary and possibly the first concert film ever made. Its sparkling new 4K restoration by IndieCollect, with color correction by Oskar Miarka, recently premiered at the 57th New York Film Festival with sold out shows. The film was named to the National Film Registry in 1999, and its restoration was funded by the National Film Preservation Board of the Library of Congress in time to celebrate the film’s 60th Anniversary.
Filmed at the 1958 Newport Jazz Festival in Rhode Island and directed by world-renowned photographer Bert Stern, Jazz on a Summer’s Day features intimate performances by an all-star line-up of musical legends including Louis Armstrong, Thelonious Monk, Gerry Mulligan, Anita O’Day, Chuck Berry, Dinah Washington, and closes with a beautiful rendition of The Lord’s Prayer by Mahalia Jackson at midnight to usher in Sunday morning. The film has been beautifully and extensively restored in 4K from the best surviving vault elements by IndieCollect.
ROOFTOP CINEMA 2021
Bring a friend, bring a blanket or camp chairs, and prepare yourself for an evening of independent films and videos under the stars (and socially distanced)! Rooftop Cinema returns to the Museum’s rooftop sculpture garden select Fridays in late summer for its sixteenth season.
Rooftop Cinema is a program of MMoCA’s Education Department and is curated by James Kreul, with technical support provided by Tanner Engbretsen. MMoCA’s film programming is generously funded by an anonymous donor, maiahaus, and Venture Investors, LLC.