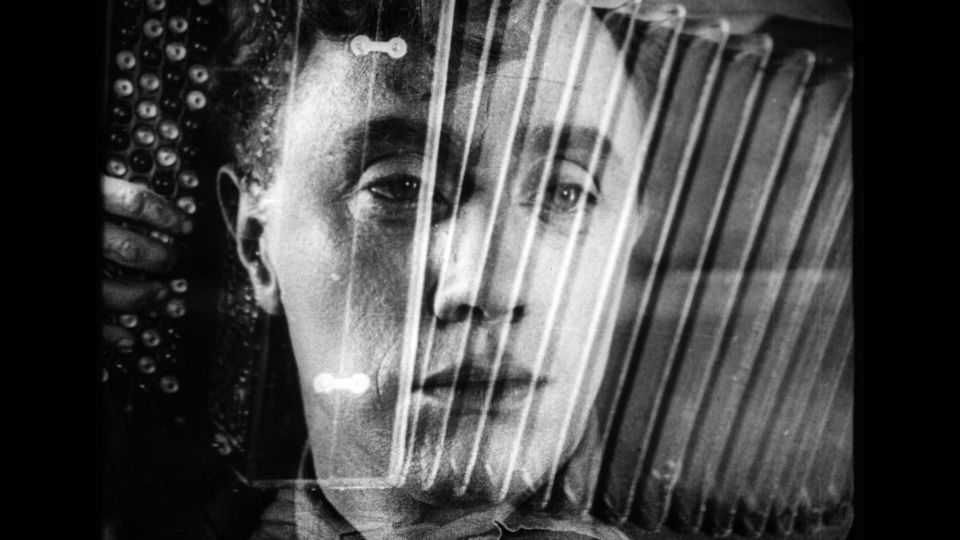 Join MMoCA for a film screening of The Village Detective: A song cycle (2021, USA, Bill Morrison).
Bring a friend, bring a blanket or camp chairs, and prepare yourself for an evening of independent films and videos under the stars. Rooftop Cinema returns to the Museum’s Rooftop Sculpture Garden. Films begin at sundown, approximately 8 PM.
Learn more: https://mmoca.org/rooftopcinema
ABOUT THE FILM
In 2016, a fishing boat off the shores of Iceland caught four reels of 35mm film, seemingly of Soviet provenance, in its nets. The discovery wasn’t a lost work of major importance, but an incomplete print of a popular Soviet comedy from 1969, starring the beloved Russian actor Mihail Žarov. Bill Morrison, whose previous films Decasia and Dawson City: Frozen Time utilize lost, deteriorating footage, believes that the water-damaged print can be seen as a fitting reflection on the film work of Žarov, who re-emerges from the bottom of the sea 50 years later like a Russian Rip Van Winkle. Morrison uses the discovery as a jumping off point for his latest meditation on cinema’s past.
“Morrison’s movies feel like half-remembered reveries formed from memories you can no longer consciously recall. Hovering at the intersection of reappropriation, preservation, history, music, and art, any one of his works will haunt you for the rest of your life.” –Dan Schindel, Hyperallergic
TICKETS
• Rooftop Cinema is $7 per screening, or free for MMoCA members and anyone age 18 and younger.
• Ticket sales begin at 7:30 PM in the Museum Lobby.
• Screenings relocate to the lecture hall if rain is predicted.
SUPPORT
Rooftop Cinema is a program of MMoCA’s education department and is curated by James Kreul, with technical support provided by Tanner Engbretsen. MMoCA’s film programming is generously funded by maiahaus and Venture Investors, LLC.
Film still from The Village Detective: A song cycle (2021) directed by Bill Morrison. Image courtesy of Kino Lorber.