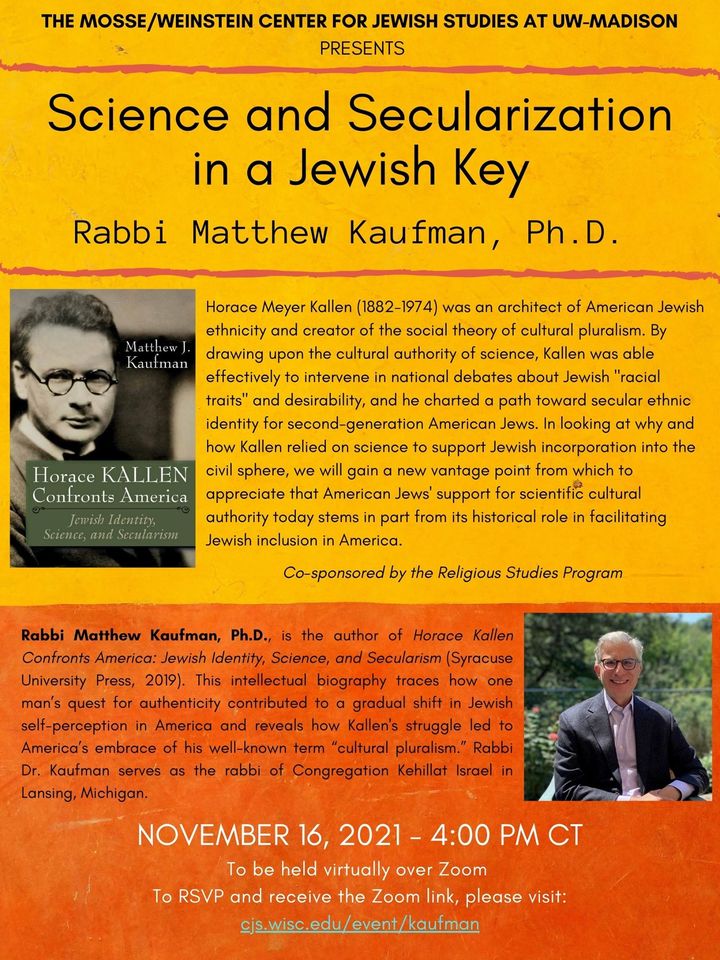 TO BE HELD ONLINE, VIA ZOOM.
To register and receive the Zoom info, visit https://cjs.wisc.edu/event/kaufman/
About the lecture:
Horace Meyer Kallen (1882–1974) was an architect of American Jewish ethnicity and creator of the social theory of cultural pluralism. By drawing upon the cultural authority of science, Kallen was able effectively to intervene in national debates about Jewish “racial traits” and desirability, and he charted a path toward secular ethnic identity for second-generation American Jews. In looking at why and how Kallen relied on science to support Jewish incorporation into the civil sphere, we will gain a new vantage point from which to appreciate that American Jews’ support for scientific cultural authority today stems in part from its historical role in facilitating Jewish inclusion in America.
About the speaker:
Rabbi Matthew Kaufman, PhD, is the author of Horace Kallen Confronts America: Jewish Identity, Science, and Secularism (Syracuse University Press, 2019). This intellectual biography traces how one man’s quest for authenticity contributed to a gradual shift in Jewish self-perception in America and reveals how Kallen’s struggle led to America’s embrace of his well-known term “cultural pluralism.” Rabbi Dr. Kaufman serves as the rabbi of Congregation Kehillat Israel in Lansing, MI.