Murray Seminar | The Painted Histories of the Welles-Ros Bible 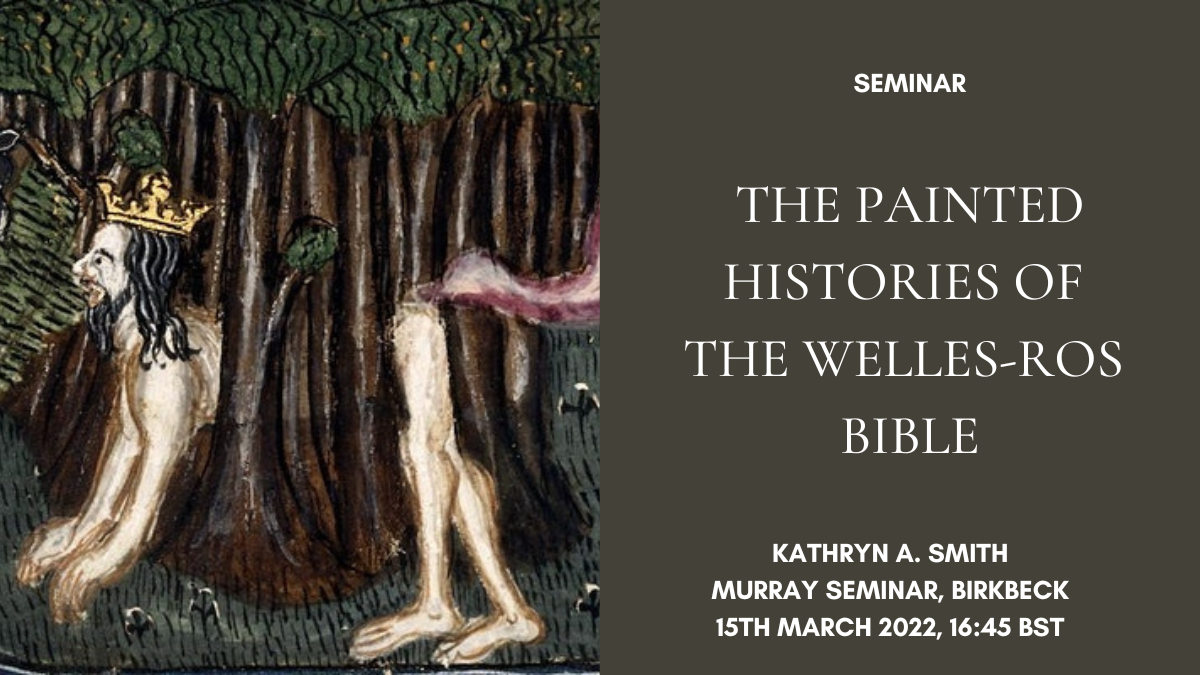 The final Murray Seminar at Birkbeck, entitled “The Painted Histories of the Welles-Ros Bible,” will be delivered by Kathryn A. Smith on Tuesday 15th March, 16:45 BST.

“Sometime probably c.1366-73, Maud de Ros, widow of the Lincolnshire nobleman John, 4th Baron Welles, commissioned the Welles-Ros Bible, a grand illuminated pandect that preserves the most complete surviving witness of the Anglo-Norman Bible—England’s earliest full prose vernacular Bible translation. This paper examines evidence for the Bible’s production under Carmelite auspices, and for the Carmelite sympathies of its patron and principal intended reader-viewer, the adolescent John, 5th Baron Welles. The paper analyzes a selection of the Bible’s richly narrative illustrations as well as elements of its design, to show how these painted histories register the lineal, tenurial, spiritual, and social concerns of a noble family struggling to rebuild in the wake of the Plague.”

Kathryn A. Smith, Professor of Art History at New York University, is the author of Art, Identity and Devotion in Fourteenth-Century England (2003), The Taymouth Hours: Stories and the Construction of the Self in Late Medieval England (2012), and articles, essays and reviews on early Christian and late medieval art, especially the illustrated manuscripts of Gothic England. She is founding series editor of Studies in the Visual Cultures of the Middle Ages (Brepols) and was a co-editor of the journal Studies in Iconography. Her seminar derives from her current book project, Scripture Transformed in Late Medieval England: The Religious, Artistic and Social Worlds of the Welles-Ros Bible, her work on which is supported by a Senior Fellowship from the Paul Mellon Centre for Studies in British Art.