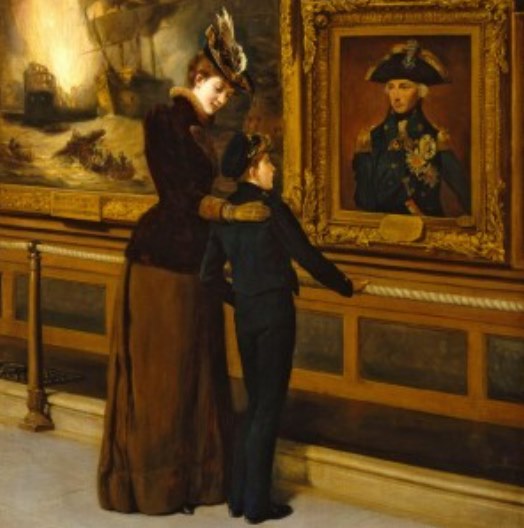 A Research Lunch event by Katherine Gazzard.
‘There is no public collection of pictures which is less visited by artists and archaeological students than that in the Painted Hall of Greenwich Hospital. On the other hand, there is scarcely one that is more popular.’ Printed in The Athenaeum, a well-known literary magazine, in July 1870, these comments referred to the National Gallery of Naval Art, which had been established almost fifty years previously, its collection of portraits and battle pictures providing a visual history of British maritime endeavour. Opening in spring 1824, a few weeks before the foundation of the National Gallery, the Naval Gallery (as it was commonly known) was the first public art gallery in Britain to describe itself as a ‘national institution. The Royal Academy and the British Institution advised on its displays, while contemporary artists created new works to hang upon its walls. Recent scholarship has accordingly recognised the Naval Gallery under its energetic founder Edward Hawke Locker as a key site in the early nineteenth-century British art world.
Less attention has been paid to the subsequent development of the Naval Gallery from Locker’s retirement in 1845 through to the gallery’s closure in 1936. This paper explores this later phase in the institution’s history. The above-quoted comments from The Athenaeum suggest that the Naval Gallery was increasingly regarded as a popular attraction with little to offer serious students of art. Yet it remained closely connected to the art world. Whereas Locker had been an Admiralty official, the succeeding curators were professional artists. They continued to commission contemporary artworks, reinventing the traditional conventions of naval art for an age of empire and steam-power. Analysing these developments provides insights into shifting attitudes towards the Royal Navy as a national symbol and into the rapidly evolving exhibition culture of nineteenth-century London.
+ Google Calendar+ iCal Export