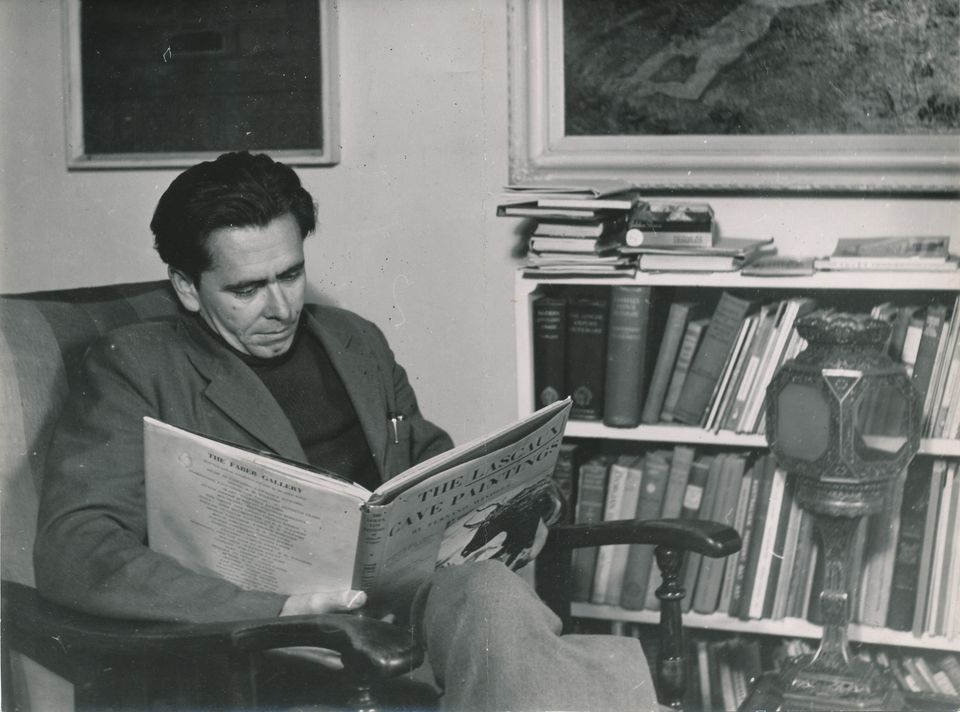 This event is part of the conference series Liquid Crystal Concrete: The Arts of Postwar Britain 1945–1965

In 1947 the Abbey Art Centre was established by the British-born German art dealer and ethnographic collector, William Ohly, at New Barnet. Set on three acres just beyond the outskirts of a desolate London, it attracted a swathe of Australian, British, refugee German, Austrian and Commonwealth artists. Not only did this colony of artists traverse national and temporal boundaries within a single location, it also encouraged cross-cultural dialogues within its diverse residential hub and provided important contacts in the British and European art worlds at a time of increasingly pluralist and international cultural and political activity. Yet the Abbey Art Centre has remained art historically marginalised.

For many of the colony’s residents, including the Scottish painter Alan Davie, the British tachist artist Phillip Martin and the Australian art historian Bernard Smith, the Abbey’s unique atmosphere, together with William Ohly’s aesthetically potent collection of Asian, Mesopotamian, Mexican and Romanesque antiquities, and African and South Pacific artefacts, inspired a modernist primitivism and globalist vision. In uncovering what Okwui Enwezor called “this hidden vein of artistic post-war activity” we can reassess the cultural climate during this major geopolitical phase from a different perspective. In this paper the Abbey Art Centre is considered as a site of transnational artistic experimentation and modernist postwar cultural exchange.

Despite its name, the Abbey Art Centre operated on the peripheries of London’s postwar art world: marginal both in location – situated in then still rural New Barnet, Hertfordshire – and aesthetics. The Abbey’s assortment of salvaged antiquarian buildings, along with its founder William Ohly’s personal collection of ethnographic art, represented the antimony of modernism’s forward-facing aspirations. But it was precisely the stimulus of the past for artists of the present that Ohly sought, and which underpinned his dealings at the Berkeley Galleries, Mayfair, where, from 1941 until his death in 1955, he alternated exhibitions of antiquities with those of contemporary artists. Both the Abbey and the Berkeley Galleries reflected Ohly’s world view as expansive and eclectic and in which the arts were enduring. Furthermore, both functioned to assist relatively unknown artists – particularly refugees from National Socialism and new arrivals from former British colonies. Among the Abbey’s early residents were émigré sculptor Inge Winter (later Inge King), Hungarian painter-filmmaker Peter Foldes, Viennese painters Helen Grunwald and Angela Varga, Simplicissimus illustrator Marcel Frishman and sculptor wife Margret Kroch-Frishman, as well as renowned long-term resident animator Lotte Reiniger and her art historian husband Carl Koch. Working alongside them was a steady stream of Australians, many of them scarred by years of war service, as were the struggling young Britons attracted by the Abbey’s creative and communal way of life, notably Alan and Bili Davie, Phillip Martin and Helen Marshall, and John Coplans. This paper connects Ohly’s activities at the Abbey and the Berkeley Galleries with his efforts to help émigré and newly arrived “Commonwealth” artists struggling to find a foothold in London’s then notoriously provincial artworld, and suggests that the Abbey’s marginality, both physically and art historically-speaking, offers a rich interpretative frame for re-examining this vital period in British postwar art history.

Jane Eckett is an art historian, curator and teaching associate in the School of Culture & Communication at the University of Melbourne, Australia. She is also a Fellow of the Centre of Visual Art, University of Melbourne and Postdoctoral Research Associate on a 2020–23 Australia Research Council project, The Abbey Art Centre: Reassessing Postwar Modernism 1946–1956, working with Sheridan Palmer and a multi-institutional team of researchers from Australia and the UK. Her research interests are in the fields of modernist diasporas and multiple modernities, particularly in the areas of sculpture and printmaking. Since completing her PhD on the Centre Five group of modernist sculptors (awarded from the University of Melbourne, 2017), she has held the 2018 Ursula Hoff Fellowship, for which she examined over 500 monoprints by the Bauhausler Ludwig Hirschfeld-Mack at the Ian Potter Museum of Art and National Gallery of Victoria. She also co-curated Melbourne Modern: European Art and Design at RMIT Since 1945 for RMIT Galleries (2019) and co-edited with Harriet Edquist the award-winning accompanying catalogue. Other publications include chapters on Centre Five in Bauhaus Diaspora: Transforming Education in Art, Architecture and Design (Melbourne University Press in association with Power Publications, Sydney, 2019) and on public art and memorials for Australia Modern: Architecture, Landscape and Design (Thames and Hudson, 2019). As a 2021 Melbourne Research Fellow, she prepared for an exhibition she is guest curating, Centre Five at McClelland, scheduled to open at the McClelland Gallery, Langwarrin, in October 2022, and edited and contributed five chapters to the book, On the Land of the Bunurong: A History of Art and Architecture in Frankston, commissioned by McClelland (2022, forthcoming).

Sheridan Palmer is an art historian, curator, biographer and an Australian Research Council senior research associate at the University of Melbourne where she is working on an ARC project The Abbey Art Centre: Reassessing Postwar Modernism 1946–1956. Sheridan is also an associate of the Centre of Visual Art at the Victorian College of the Arts and has previously worked in conservation at the National Gallery of Australia, as a curator at the Art Gallery of Ballarat and as an art dealer in Australian and British art. She has published extensively in literary and art journals and has been awarded numerous grants, including a Paul Mellon Centre for Studies in British Art research grant, a Harold White Fellowship at National Library of Australia and a Manning Clark Copyright Agency Ltd Fellowship. Exhibitions curated have included The Goddess Grins: Albert Tucker and the Female Image, Heide MoMA (2007) and The Lake Hindmarsh Project, (2010), and the Helen Ogilvie Retrospective at the Ballarat Fine Art Gallery. Her major publications include Centre of the Periphery: Three European Art Historians in Melbourne, (2008); Hegel’s Owl: The Life of Bernard Smith, (2016), Antipodean Perspective: Selected Writings of Bernard Smith, co-edited with Rex Butler, 2018, and is editor of the forthcoming 3rd edition of Bernard Smith’s European Vision and the South Pacific.