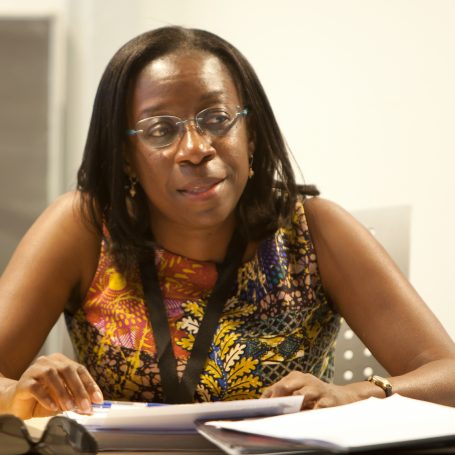 “Bí a bá perí akọni, a ó fida lalẹ”! When the soul of the beloved is addressed, it is right that the gestures be proper.

In a career that spanned over three decades, Tẹjumọla Ọlaniyan pursued a unique, capacious, and generous vision of humanistic scholarship in the field of African literary and cultural studies, including the black world as a whole and extending beyond it. “My deep interest,” he once asserted with characteristic precision, “is transdisciplinary teaching and research. My goal is the cultivation of critical self-reflexivity about our expressions and their many contexts.”

In this spirit, the UW-Madison Department of English and the Center for the Humanities is honored to present the first annual Tejumola Olaniyan Memorial Lecture with Moradewun Adejunmobi, professor and former chair in the African American and African Studies Department at the University of California, Davis.

Please register in advance to join the conversation.

Moradewun Adejunmobi is a Professor and former chair in the African American and African Studies Department at the University of California, Davis. She holds courtesy appointments in the French and Comparative Literature departments, and is a former chair of the Performance Studies Graduate Group at UC Davis. Her research interests are in African literature and performance, popular media, and popular culture. She is the author of two books: JJ Rabearivelo, Literature and Lingua Franca in Colonial Madagascar, and Vernacular Palaver: Imaginations of the Local and Non-Native Languages in West Africa. She is also a co-editor (with Carli Coetzee) of the Routledge Handbook of African Literature.