The Courtauld | Charles Stankievech and The Double Agent 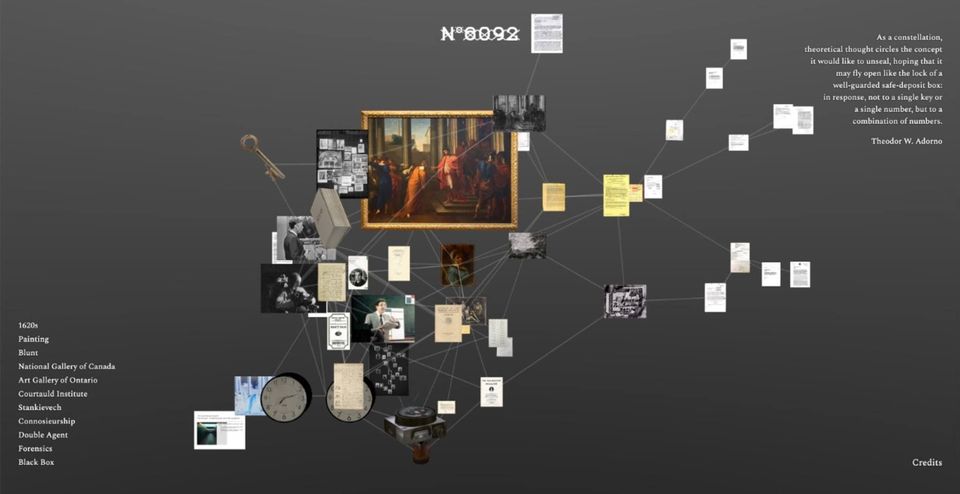 Revealing the entwined origins of connoisseurship and forensics in the 17th century, the digital artwork Nº6092 presented by the KW, Berlin and the National Gallery of Canada dissects an evolving archive. At the centre of the investigation lies a double knot: the debated authorship by Nicolas Poussin of the painting Augustus and Cleopatra [accession Nº6092] and the dual identity of curator/spy Sir Anthony Blunt who originally discovered the work in a cloud of controversy. Originally a research exhibition at the National Gallery of Canada (for which Blunt acquired painting Nº6092), the following online project reopens the unsolved case presenting collection masterpieces, archival documents and artistic interventions using a networked exhibition design that combines strategies from Aby Warburg’s Mnemosyne and his Law of the Good Neighbor. Beginning with materials dating back to the 1620s, the multimedia content that is gathered here traces evolving media and geopolitical spaces: from court painting, through academic slide lectures, to Power Point presentations. Weaving a dense network of associations and speculations, the case of Nº6092 questions straight-forward notions of agency, authorship and attribution that resonate beyond the painting and Blunt’s particular circumstances into contemporary questions of cryptoart and black market freeports.
This event will involve a discussion around the project Nº6092 by the artist Charles Stankievech, and commissioning KW curator Nadim Samman.
Access the project online as part of the KW series Open Secret:
https://opensecret.kw-berlin.de/…/no6092-law-of-the…/
Charles Stankievech is an artist, writer and curator, whose award-winning work has been shown at institutions including the Palais de Tokyo, Paris; HKW, Berlin; Louisiana Museum of Modern Art, Denmark; National Gallery of Canada; TBA21, Vienna, as well as several biennials from Venice to SITE Santa Fe. He has lectured at dOCUMENTA (13) and the 8th Berlin Biennale, and his writing has been published by Verso, MIT, Sternberg Press, e-flux, and Princeton Architectural Press. He is an editor of Afterall Journal, a co-founder of the Yukon School of Visual Art, and was Director of Visual Studies at the University of Toronto from 2015-2021, where he is currently Associate Professor.
Nadim Samman read Philosophy at University College London before receiving his PhD from the Courtauld Institute of Art. He was Co-Director of Import Projects e.V. in Berlin from 2012 to 2019 and, concurrently, Curator at Thyssen-Bornemisza Art Contemporary, Vienna (2013-2015). He curated the 4th Marrakech Biennale (with Carson Chan) in 2012, and the 5th Moscow Biennale for Young Art in 2015. He co-founded and co-curated the 1st Antarctic Biennale (2017) and the Antarctic Pavilion (Venice, 2015-). In 2014 Foreign Policy Magazine named him among the ‘100 Leading Global Thinkers’. Widely published, in 2019 he was First Prize recipient of the International Award for Art Criticism (IAAC). He is currently Curator at KW Institute for Contemporary Art, Berlin.
Organised by Professor Deborah Swallow (Märit Rausing Director, The Courtauld), as part of the Open Courtauld programme.
+ Google Calendar+ iCal Export