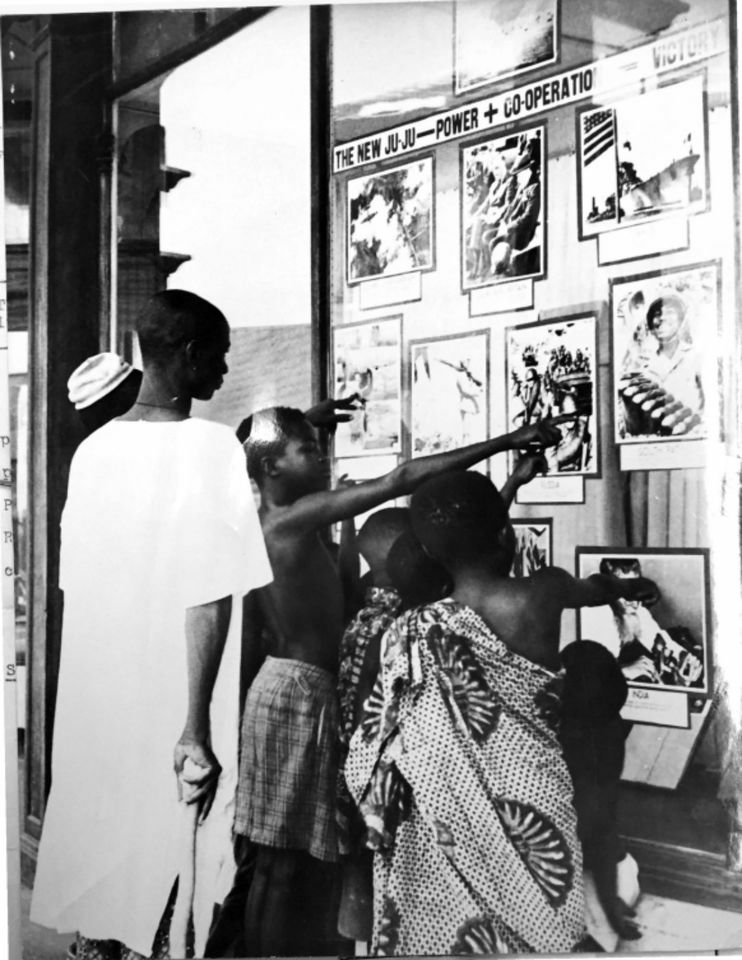 Beginning in the 1920s, news agencies started distributing photographs using devices that transmitted images along telephone wires and radio waves. For the first time, large publics beheld images that had been separated from their material supports, travelling as electrical signals through telecommunications infrastructure. Yet, for another twenty years, wire photography remained limited to the industrialized world. All this changed during World War Two, when the American Office of War Information (OWI) established a news photography service that operated in colonial periphery, where privately funded news services had never distributed photos, since there was no chance of recovering profits.
The OWI Radiophoto Section’s effort to connect the colonial periphery with global visual telecommunications both worked within and undermined what historian and anthropologist Ann Stoler has called “anachronistic space”. According to this colonial spatial schema, as a modern person journeyed into the periphery, they would also journey backward in time, to a primitive place in which magic still held sway. As a kind of modern enchantment, wire photography had the potential to trouble such schemas, dialectically reversing the spatial order of rationality and magic.
In connecting colonial societies to the temporal pace and rhythms of global telecommunications, the OWI remapped cultural geographies in ways that the engineers themselves only dimly grasped. Radiophotos rendered visible the new infrastructural system knitting together places such as Brazzaville and Bombay into wider networks that included not just the colonial metropole but also cities such as New York, Sydney, Algiers, Berne, and Stockholm. While the OWI was a propaganda organ, the fact that its policymakers considered it necessary to convince colonized people heralded a potentially new set of relations: whatever its motives and intentions, by linking these places together via radiophotography, the OWI created the potential for a global visual public sphere beyond national and imperial boundaries. However, this effort had varying degrees of success in different colonial territories. This case study demonstrates that, far from creating a “global village,” telecommunications media can also exacerbate existing divides by making the places it does not connect relatively more distant in infrastructural terms. Anachronistic space can be produced by infrastructure as well as destabilized by it, a problem worth keeping in mind with regard to the contemporary “digital divide.”
Jonathan Dentler is currently a Postdoctoral Research Fellow with the Visual AI and Early Conflict Photography (EyCon) Project, which aims to harness AI-reliant tools to analyze a large corpus of colonial, imperial, and international conflict photography. The project is connected with a network of archives in France and Britain, and is co-funded by Arts and Humanities Research Council/Labex Les Passés dans le Présent joint grant in partnership with the Université de Paris. He received his Ph.D. in History from the University of Southern California, where he also earned a Visual Studies graduate certificate. His dissertation, “Wired Images: Visual Telecommunications, News Agencies, and the Invention of the World Picture, 1917-1955,” is a global history of wire photography services.
Organised by Professor David Peters Corbett (The Courtauld), and chaired by Dr Matthew Holman (The Courtauld).
Booking will close 30 minutes before the event start time.
Details on how to join the online event will be sent out 48 hours before and on the day of the event. If you do not receive this information, please contact researchforum@courtauld.ac.uk
For more information visit: https://courtauld.ac.uk/…/modern-enchantments…/
Image credits:
Probably in Accra in the British Gold Coast colony, present-day Ghana. Verso caption: “Somewhere in Central Africa, June 14, 1943 – Clustered about OWI picture exhibit showing the new Juju, or “witch doctor magic” of the Allies, African natives look at photographs of United Nations’ activity in the war for freedom.” Office of War Information Files, Box 2128, Entry 391, RG 208, National Archives and Records Administration.