The Courtauld | The Development of Historical Digital Methods: Late Hokusai as case study 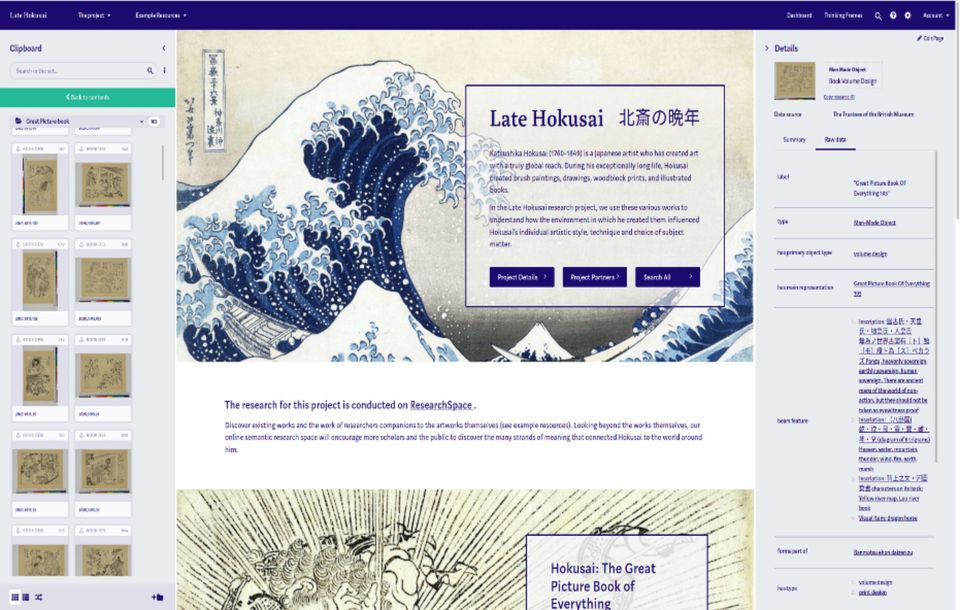 Historians use different techniques, methods, and theories to research historical questions, but the use of digital data methods has been restricted to the ancillary role of reference and index. Digital art history research supporting both the Late Hokusai project and the Great Picture Book of Everything resource has taken a different approach: transferring the methods of investigation, explanation and presentation to a digital platform; acknowledging their interdependence; and providing a wider and progressive representation of historical knowledge. In exposing these processes in a data narrative, it has started to address issues of transparency in historical research, and potentially provides wider relevance and impact to different audiences by addressing deficiencies of meaning and social context in modern information networks.
As with other artists, the art of Katsushika Hokusai (1760-1849) provides snapshots of social dynamics and relations which tell us about the artist and the environment in which he worked. The relationship and dependency between people and their environment played an important part in Hokusai’s approach and subject matter. This inherent dialectic dynamic is also an important aspect of historical research and the underlying theories of knowledge that are employed. The Hokusai project has therefore provided an important vehicle for developing digital data processes that better represent the work of artists and the wider context of their work; and additionally the way in which art historians combine mind and matter to develop new knowledge about art and society. This has been achieved through the open source ResearchSpace system – a new type of contextualising knowledge base system promoting collaborative interdisciplinary research and allowing people to grow and synthesise knowledge that relates to and reveals different aspects of history and society.
Tim Clark FBA is Honorary Research Fellow in the Department of Asia at the British Museum. Until 2019 he was Head of the Japanese Section at the Museum, where he led a major reinstallation of the Museum’s permanent collections in the Mitsubishi Corporation Japanese Galleries (2018). Tim curated and co-curated a succession of special exhibitions at the BM, most recently Shunga (2013), Hokusai (2017) and Manga (2018) and Nara (2019). From 2016-2019, he was Principal Investigator in the AHRC-funded international research project Late Hokusai: Thought, Technique, Society (2016-2019). The pilot ‘Late Hokusai’ resource in ResearchSpace is one outcome of that project.
Dominic Oldman is Head and Principal Investigator of the ResearchSpace project at the British Museum, and a Senior Curator in the Department of Ancient Egypt and Sudan. He is an interdisciplinary researcher with a focus on digital research methods and digital historiography. His research is practically released through the open source ResearchSpace system – a new type of contextualising knowledge base system. He is deputy co-chair of the CIDOC CRM (Conceptual Reference Model) Special Interest Group and is currently a doctorate researcher at the University of Oxford, History Department. He was co-investigator on the AHRC-funded Late Hokusai project.
Organised by Dr Stephen Whiteman (The Courtauld) and Dr Austin Nevin (The Courtauld) as part of their Frank Davis Memorial Lecture series titled ‘Art History Futures: At the Junction of the Digital and Material Turns’.
+ Google Calendar+ Add to iCalendar