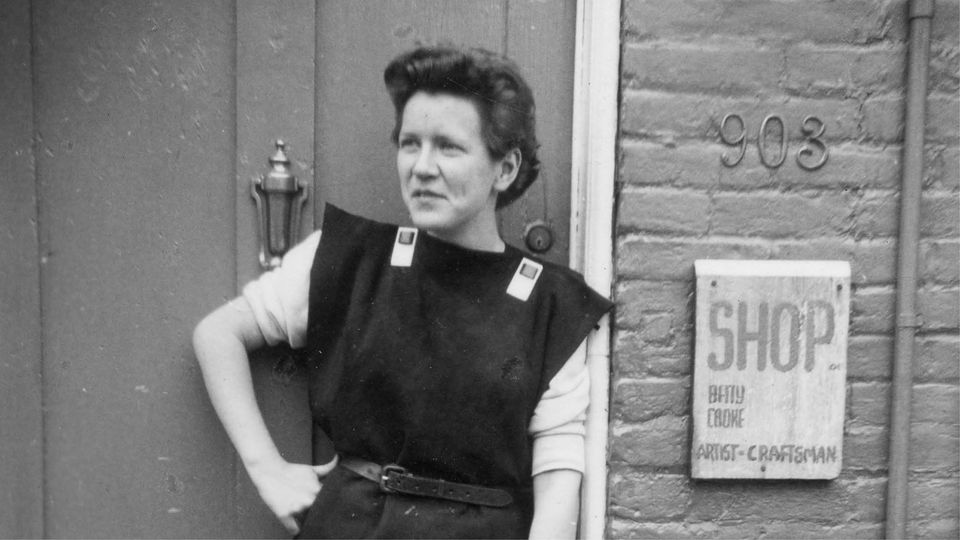 Location: Virtual
While Betty Cooke is best known for designing and fabricating jewelry, she also played a key role introducing the local Baltimore community to innovative modern design first through her home on Tyson Street and later at The Store Ltd, her shop in the Cross Keys community. The Store Ltd was one of the first shops in America to sell Marimekko fashions, Le Creuset pots, Noguchi paper lamps, and even cardboard furniture designed by Frank Gehry. Join Victoria Pass, faculty member in the Department of Art History, Theory, and Criticism at the Maryland Institute College of Art, in conversation with Shane Prada, Director of the Baltimore Jewelry Center, as they discuss Cooke’s impact on Mid-Century design and Baltimore aesthetics, and her influence on contemporary jewelry. Pass will also discuss the working relationship Cooke had with others such as fashion designer Geoffrey Beene and explore Cooke’s role in the broader context of Mid-Century designers and design intermediaries.
This program is part of a series inspired by Cooke and her artistic practice and accompanies the exhibition Betty Cooke: The Circle and the Line, on view at the Walters Art Museum through January 2, 2022. The exhibition is accompanied by a fully illustrated publication, The Circle and the Line: The Jewelry of Betty Cooke, which includes an essay by Jeannine Falino and reflections by a number of friends and collectors. The Circle and the Line: The Jewelry of Betty Cooke is published by the Walters Art Museum in association with D Giles Limited; it is available for purchase at the Walters Museum Store.
This event is virtual and is available exclusively on our Facebook and YouTube pages. You don’t need an account on either platform to enjoy the program.
View this event on our website: https://thewalters.org/event/fashion-week/
About the Guest Speakers
Victoria Rose Pass is an Associate Professor at the Maryland Institute College of Art and a specialist in Visual Culture, particularly in areas of design and fashion. Her research considers the history of fashion culture in the 20th century and focuses specifically on issues of gender and race. Her essay “Racial Masquerades in the Magazines: Defining White Femininity Between the Wars” was recently published in the Journal of Modern Periodical Studies. She has co-edited two books, Design Beyond the Canon with Jenniver Kauffman-Buhler and Christopher Wilson published by Bloomsbury in February 2019, and Women’s Magazines in Print and New Media with Noliwe Rooks and Ayana Weekley published by Routledge in 2016. Her writing has also appeared in Fashion, Style & Popular Culture, Omenka Magazine, Design and Culture, caa.reviews, and BmoreArt.
Shane Prada came to Baltimore in 2004 as a Teach For America corps member. After receiving her Master of Arts in Teaching from JHU in 2006 and completing her TFA tenure, she helped start the Green School of Baltimore, one of the first charter schools in Baltimore city. In 2010, Shane began taking evening classes at MICA’s Jewelry Center, then a continuing studies program. She fell in love with art jewelry and metalsmithing and the community fostered by the Jewelry Center. In the fall of 2012, MICA announced that it would discontinue the 22-year old Jewelry Center program in 2014. In the spring of 2013, Shane took the lead of a group of core MICA faculty and students who sought to create a new organization that would continue the legacy of the MICA Jewelry Center. She has held the role of director of the Baltimore Jewelry Center since the organization opened in June 2014.