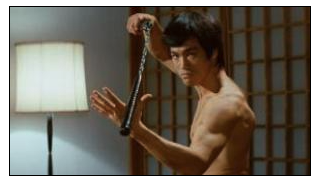 In an early 20th century Shanghai where colonialist rule by the Japanese is fast encroaching, a martial arts prodigy (Lee) leads his fellow students in revolt when their master is killed by members of a Japanese dojo. Action packed and politically charged, this is the best of the three starring vehicles Lee made for Hong Kong studios before he conquered Hollywood with Enter the Dragon.