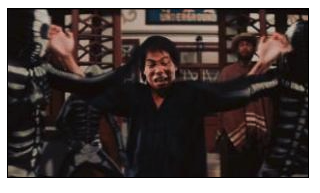 Made less than three years after Bruce Lee passed away, The Dragon Lives Again is “the one Bruceploitation movie to rule them all, and the most famously berserk disaster-piece ever to come out of Hong Kong. [The story] follows Bruce to Hell, where the King of the Underworld tells him he can escape back to Earth but only if he fights an army of copyright-infringing characters: Dracula! Clint Eastwood’s Man with No Name! James Bond! The Godfather! And Japan’s blind swordsman, Zatoichi! There’s also an army of skeletons. Aiding Bruce are Popeye, the spinach-chugging sailorman (played by Hong Kong director and star, Eric Tsang), and Caine from the TV series Kung Fu (not played by David Carradine). Sexy ladies scream for Bruce…and things hit overdrive in a sexy subplot in which softcore starlet Hong Kong Emmanuelle tries to take over Hell by screwing the King of the Underworld to death” (Chris Poggiali & Grady Hendrix, These Fists Break Bricks).