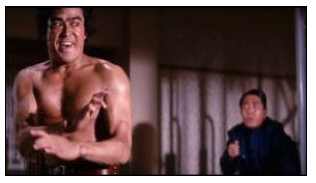 In his first of three appearances as the ass-kicking, skull-busting Terry Tsurugi, Chiba established one of the most iconic and violent personas in martial arts movies. Terry’s a mercenary hired by both the Yakuza and the American mafia to kidnap an heiress. When he isn’t paid, Terry decides to do what he can to protect the wealthy young woman.