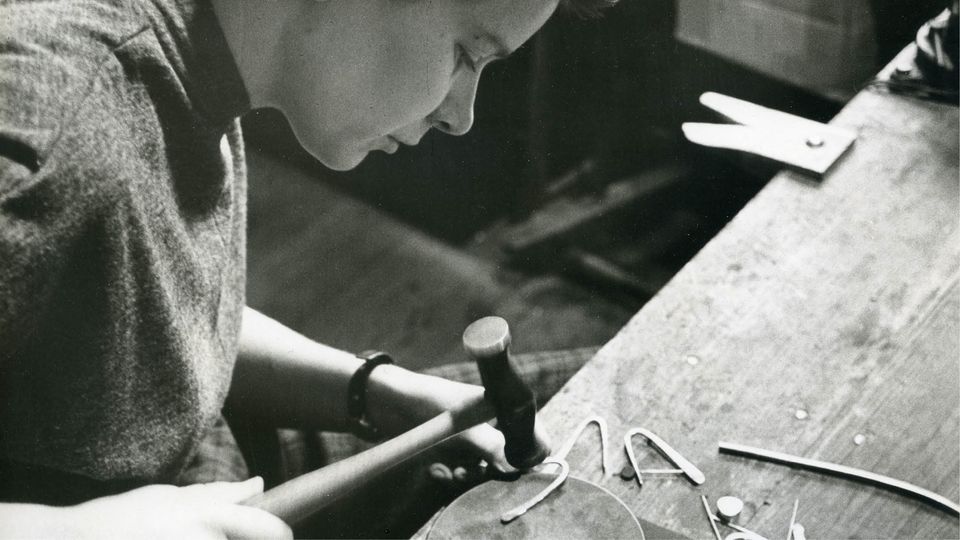 Location: Virtual
Join Baltimore Jewelry Center artists Mary Raivel and Earl Jones for a lecture about their work and the tools they use to produce their creations. Mary is inspired by Betty Cooke’s life and work, and her contributions to contemporary art jewelry. Earl Jones expresses line and shape through his work and uses similar mediums to those used in Betty’s art practice.
This program is part of a series inspired by Cooke and her artistic practice that is explored in the exhibition Betty Cooke: The Circle and the Line, on view at the Walters Art Museum from September 19, 2021–January 2, 2022. The exhibition is accompanied by a fully illustrated publication, with an essay by Jeannine Falino and reflections by a number of friends and collectors. The Circle and the Line: The Jewelry of Betty Cooke is published by the Walters Art Museum in association with D Giles Limited; it is available for purchase at the Walters Museum Store.
This event is virtual and is available exclusively on our Facebook and YouTube pages. You don’t need an account on either platform to enjoy the program.
View this event on our website: https://thewalters.org/event/tools-trade/
About the Guest Speakers
Earl Jones began designing and making jewelry in the early 1970s. After earning a living as a carpenter, Jones began creating sculpture with found objects. Working in sculpture led him to building objects in copper, which then sparked an interest in making jewelry with copper. In 2012, after years of experimenting with various metalsmithing and jewelry techniques, Jones began making the production jewelry he is now known for, simple copper shapes that he pierces by hand with a jeweler’s saw and then patinas with a jeweler’s torch. Jones’ aesthetic is very minimal and his approach to making is similarly minimal: Jones uses only one kind of hammer in creating his earrings and only a handful of other tools. Jones creates his work out of his home studio and utilizes the studio rental program at the Baltimore Jewelry Center as well. His work is sold at the Baltimore Museum of Art gift shop. In 2020, the American Craft Council awarded Jones the Society of North American Goldsmiths Award of Excellence in Jewelry and Metals.
Mary Raivel spent countless hours as a child and teen drawing, painting and making things, but stopped as an adult working in another field. More than 20 years later, she realized she had to make art again. In 2010 she began studying art jewelry and metalsmithing part-time at MICA and later, the Baltimore Jewelry Center. She fell in love with it, and in 2015, she became a full-time jewelry artist and metalsmith, selling limited production work in juried craft shows and galleries. More recently she has focused on one-of-a-kind and conceptual work.
Image: The Walters Art Museum, Baltimore. ©Betty Cooke