What’s Past is Prologue: The Unfinished American Conversation 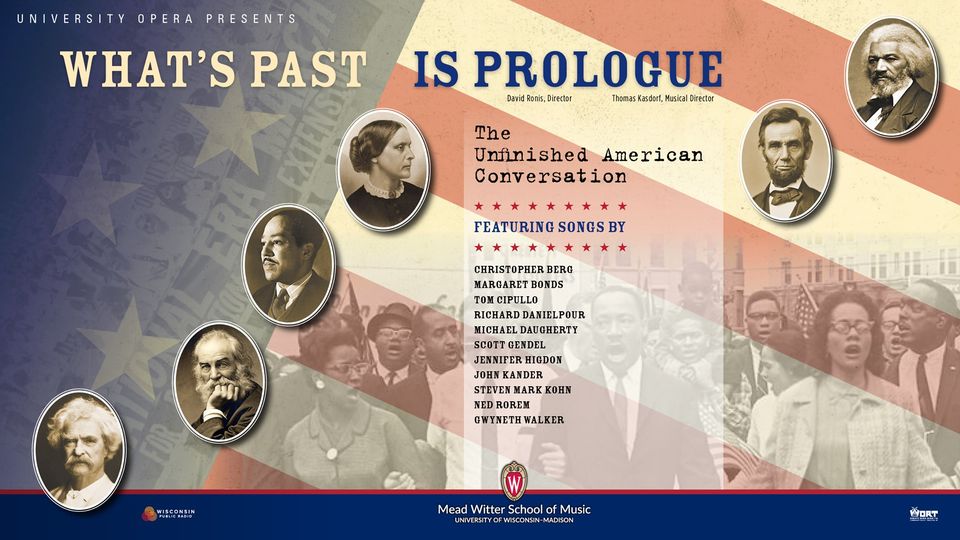 This spring, University Opera follows up its groundbreaking video production on the life and times of composer Marc Blitzstein with another video. What’s Past is Prologue: The Unfinished American Conversation, a program of staged and filmed songs and song cycles with social and racial justice themes, will be released on the Mead Witter School of Music YouTube channel on April 10 at 7:30 pm, with an encore stream on April 11th at 2:00 pm.
David Ronis, Director of University Opera, is directing, and Thomas Kasdorf is the musical director.
Today, many Americans feel we are at a crossroads. We are suffering from the isolation, grief, and financial hardship that the COVID-19 pandemic has brought about and are wary of escalating antagonism among us exacerbated by the 2020 presidential election and its aftermath. Women’s rights, LGBTQ rights, and voting rights continue to be debated and threatened. In addition, the Black Lives Matter movement has cast into stark relief our country’s checkered record on racism, law enforcement, and civil rights.
What’s Past is Prologue: The Unfinished American Conversation addresses these concerns through a series of songs and song cycles focused on events in American history, seen through the lens of today’s socio-political climate. The title, taken from the famous quote from Shakespeare’s The Tempest, asks us to examine our history–where we have been, where we are now– and to consider where we might be headed.
The video premieres on April 10 at 7:30 pm with a repeat showing on April 11th at 2:00 pm. Although there will be no admission price for access, donations will be gratefully accepted.
In addition to the show, University Opera will post two extra features, both panel discussions. The first–a discussion of legacy of the patriarchy and other hierarchical structures in the arts, and how that paradigm is shifting–features Amy Gilman, Director of the Chazen Museum of Art; Susan C. Cook, Director of the Mead Witter School of Music; and Quanda Johnson, guest artist in the production and Ph.D. candidate in Interdisciplinary Theatre Studies. The second brings together the students who perform in The Trial of Susan B. Anthony to discuss the piece, Ms. Anthony, her controversial stance on race, and cancel culture.
+ Google Calendar+ iCal Export