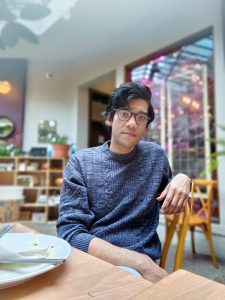 Biography
Ujaan’s research focuses on the architectural and religious History of Modern South Asia. His dissertation tentatively titled, “Producing Puri: The Discursive Productions of a Hindu Holy City in Colonial India” looks at the ways in which religion was imbricated in art, politics, and pedagogy in Colonial South Asia. Ujaan’s research articles have appeared in History of Religions, Modern Asian Studies, and the Journal of American Academy of Religion. Even though his work primarily focuses on Odisha, he has also published on the religious and urban history of colonial Calcutta. As an avocation Ujaan is interested in the precolonial history of vernacular literary cultures in South Asia. Of particular interest to him is the intersection between Sanskrit and Regional literature in Eastern India, at the wake of early modernity. He is also involved in a number of translation projects, and have coauthored a translation of Upendra Bhanja’s Baidehisha Bilasa.

“Chariots of Gods: Juggernaut, Jagannath and the many histories of the Rathayatra in the nineteenth century.” History of Religions 58, no.1 (2018):64–88.

“Pilgrimage, Politics and Surveillance: The temple of Jagannath and the colonial state in early 19th century Orissa.” International Journal of Religious Tourism and Pilgrimage 4, no.6 (2016):23–32.