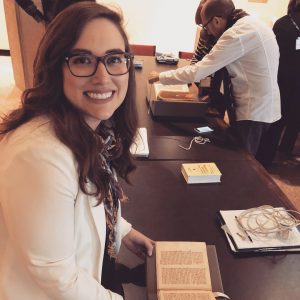 Tania graduated with a Bachelor of Science degree in Biomedical Science in 2013 from Texas A&M University with a minor in Art and Architectural History. In 2015, she completed her Master of Arts degree in Art History from the University of North Texas, with a minor in Roman History. Her MA thesis focused on imperial and liturgical processions and their impact on the mosaics of the Late Antique church of Santa Maria Maggiore in Rome.

Currently, Tania’s dissertation, “The Fabric of the Trecento: The Culture of Textiles in the Long Fourteenth Century,” examines the central role of textiles within Italian Trecento culture, especially the influence of Islamic, Byzantine, Mongol, and Italian textiles on the art and architecture of Italian cities. This requires reframing the field of Trecento art and architecture by placing textiles at the center of Italian society as the primary lens through which to view the Trecento world. Her project will provide a more complete picture of the complex societal culture of the Italian Trecento. She also consider the role of gender and social class in the production and reception of these textiles within medieval Italian cityscapes.

Additionally, Tania is a Reference Editor at the History of Cartography Project at UW-Madison and the Social Media Coordinator for the Department of Art History.

Publications:
Review of The Lay Saint: Charity and Charismatic Authority in Medieval Italy, 1150–1350, by Mary Harvey Doyno, Comitatus: A Journal of Medieval and Renaissance Studies 51 (2020):267–69.
“Vision of the Afterlife: The Heavenly Jerusalem of Santa Maria Maggiore,” Athanor 34  (2016):7–15.
“Portals Into Other Civilizations,” “New Media,” in The Art of Facsimile: A Digital Exhibition, University of North Texas, August 2016–August 2017, untfacsimileexhibition.omeka.net/