The Department of Art History would like to introduce our new series: Interview with an Auditor! The department will be sharing interviews with various auditors during the course of the upcoming 2019–2020 academic year. Everyone has interesting stories to tell and we hope to shed light on our auditor’s stories and experiences within our classrooms. 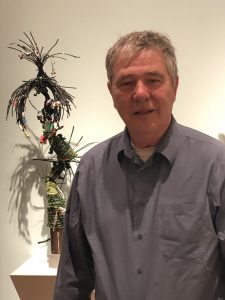 Our second auditor interviewee, UW-Madison alumnus Dr. George Savage, shares how he became interested in art history and his experience in the Senior Auditor Program.

George made a circuitous route to Madison after being raised and schooled in Pennsylvania, moving to New Mexico for his masters program in English, and finding his way to UW-Madison for their doctoral program in English. After graduating, George was hired at UW-Whitewater where he taught American literature for many years until his retirement.

As a professor of American literature, George often found an intersection between literature and visual art movements of the nineteenth century. He incorporated the overlap into his teaching, but always wanted to know more about the artworks themselves. Upon his retirement, both George and his wife, Donna Silver, enrolled in the Senior Auditor Program where they have taken a variety of courses in the Department of Art History and other departments around campus.

One of the first classes that George enrolled in was Professor Andrzejewski’s “History of American Art,” where his interest in American art was once again sparked. Since taking his first course, he has chosen other classes based, in part, on which titles have grabbed his attention. For example, Professor Nancy Rose Marshall’s “The Body, Sex, and Health in Art,” Professor Jennifer Pruitt’s “A History of the World in 20 Buildings,” and recent Art History graduate Dr. Sophia Farmer’s (Ph.D., 2019) course “Art and Architecture in the Fascist State.”

These classes have had impacts on the way George has interacted with art and architecture. For example, George recently traveled to Mexico City where he was able to see Teotihuacan, a pre-Columbian city that was discussed in Professor Pruitt’s class. By seeing Teotihuacan after learning more about it, George felt that it came more alive than if he had not had the historical background for viewing the site.

When asked to choose a favorite artwork, George lamented that it was like choosing a favorite child. However, a couple of his choices are Edward Hicks, The Peaceable Kingdom, c. 1833 in the Worcester Art Museum and Ivan Albright’s Into the World There Came a Soul Called Ida, 1920–30 at the Art Institute of Chicago.

Currently, George is enrolled into Professor Marshall’s “Sex and Death in Victorian Culture: The Pre-Raphaelites” a course that focuses on one of his favorite art movements. He enjoys the “slowing down” approach of looking at art in Professor Marshall’s class, where they examine one painting in meticulous detail.

George is extremely thankful for the Senior Auditor Program at UW-Madison and the number of auditors within the Department of Art History reinforces his belief in the power and accessibility of art to a wide audience. 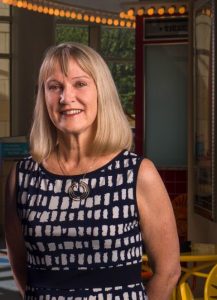 Our first auditor interviewee, Dr. Beth Neary, is a pediatrician and graduate of the UW-Madison’s medical school who first took an art history class when she was in high school in New Jersey and then later, in college, an introductory course on architecture where she met her husband. While Beth did not pursue art history or architecture in college, she took a winding path through an anthropology, then business major before settling on nutrition. It was through her studies in nutrition that led her to medical school, where she graduated at the age of thirty-six. After retiring from her career in pediatrics, Beth began to think about what she had put on hold, which included art history.

Art history has always been part of her life, as she traveled on vacations with her family where they inevitably ended up in art museums. The Philadelphia Museum of Art, in particular, became one of Beth’s favorite museums to visit as her daughter worked there for several years. Her daughter originally trained as a lawyer, but began painting as a form of therapy and eventually began pursuing her MFA at Boston University. These trips and interactions with art provided Beth with a sense of relief and release from the stress surrounding a career in medicine.

Relief, release, and calm are all emotions that Beth’s favorite artwork, Claude Monet’s Water Lilies in the Musée de l’Orangerie in Paris, France, evokes when she visits. The display of Monet’s work at the l’Orangerie provides an immersive viewing experience that allows for her to become lost in the painting and truly relax.

Since auditing art history courses, Beth has noticed a change in the way that she looks at art within the museum setting. Learning more about the works, Beth realizes that before she didn’t fully understand certain works of art as she was unaware of the details and stories that they each have to tell.

The first course that Beth audited was Professor Phillips-Court’s Spring 2019 class on the art of Rome and Florence. Italy is an especially meaningful place for Beth, as she traveled there often with her daughters and architect husband, who took them on “dark church tours” around the country. These memories greatly influenced her choice to audit Professor Phillips-Court’s course, especially since her husband had recently passed away. After her husband’s death, Beth has looked toward these art history courses as a form of therapy. She currently is taking Professor Pruitt’s course on the history of architecture in twenty buildings as a way to stay connected to her husband. Dr. Beth Neary has shown that art has the ability to inspire, calm, incite emotion, and even the ability to heal.