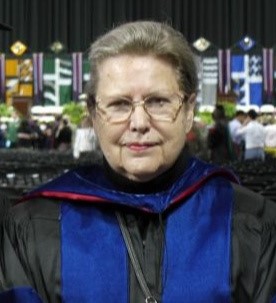 We are deeply saddened to announce the passing of Professor Emerita Jane Campbell Hutchison, 87, on July 12th, 2020, at her home in Chevy Chase, MD. An expert in the history of Northern European Art she taught in the Department of Art History from 1964 until her retirement in 2012.

Born in Washington, D.C., July 20th, 1932, Prof. Hutchison grew up in District Heights, MD, attending public schools in the area. She was a graduate of Western Maryland College, Oberlin College, and the University of Wisconsin, and a Fulbright Fellow at the Rijksuniversiteit Utrecht in the Netherlands. Prof. Hutchison was a noted authority on northern European art of the 15th through 17th centuries, with particular expertise in engravings and drawings. Her expertise was relied on for paid consultancies for the National Gallery of Art as well as major museums in Cincinnati, Amsterdam, and Frankfurt. She was also called as an expert witness for the US District Court for the Southern District of New York in an art forgery trial in 2000.

She wrote three books. Her second book, Albrecht Dürer: A Biography (Princeton: Princeton University Press, 1990), was so well reviewed in Germany that German and Japanese translations were published.

Prof. Hutchison’s career accomplishments included many other publications, lectures, and exhibition catalogues. She was awarded several research grants and served in leadership positions in organizations within as well as outside of her professional field. She grew to leadership in an academic field in which there were very few successful women at the time. What she was most proud of, however, were the 17 Masters theses and 11 PhD dissertations she supervised and those students whose lives and careers she was able to enrich. Students came from as far away as South Korea to work with her. She never retired from assisting them in their careers, and her alumni have obtained teaching posts throughout the US and in South Korea.

Upon her retirement from teaching in 2012, Prof. Hutchison returned to the Washington, D.C. area to be nearer to her family, residing in Chevy Chase, MD.

Students, colleagues, friends, and family will all remember her for her dry wit.

Her interests were exceptionally wide and varied, from theater, opera, music, politics, and history to mysteries, cooking, and hockey.

Prof. Hutchison is survived by a sister, Ann Hutchison Lung, and her brother, James W. Hutchison, as well as two nieces and a nephew and their children. A memorial service will be planned at a later date.

Memorial contributions may be made to the Department of Art History. Checks should be made payable to the “UW Foundation-Art History Fund” with “in memory of Jane Hutchison” on the memo line, and mailed to US Bank Lockbox 78807, Milwaukee, WI 53278; electronic donations can be made at https://secure.supportuw.org/give/….