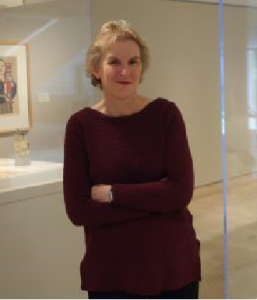 Biography
Beginning in the profession as an historical archaeologist, Professor Martin’s first published article was selected as exemplary scholarship for publication in several course readers. Since coming to the University of Wisconsin–Madison she has also edited two volumes and catalogs, written eleven articles, and presented over forty professional papers.

Professor Martin’s book Buying into the World of Goods: Early Consumers in Backcountry Virginia (Johns Hopkins, 2008) was lauded for its interdisciplinary excellence, winning best book prizes in both material culture and business history.  She used innovative methodologies and writing to break the arcane code of eighteenth-century accounting and bring people’s purchases to life through personal—and object—stories.

Her ongoing digital humanities project William Ramsay’s World: Accounting for Material Culture in Pre-Revolutionary Virginia continues her multi-year engagement with historical evidence of global trade, mercantile practice, and retail sales to re-imagine the material culture and business of colonial America. When complete, this project will be the first visual dictionary of objects and on-line chronicle of consumer behavior in early America.

Finally, her book manuscript Before the Light Bulb: A Material Culture of Lighting in American Homes is nearing completion. It analyzes how light was created, augmented, experienced and ultimately transformed in America in the two centuries before electricity. Two core themes are the marvels and problems of lighting, gleam, and shimmer in early domestic interiors and how banishing the night through artificial lighting changed everyday life. Together, lives and things—and their relationships and experiences—were changed forever. By thus examining the material culture(s) of the immaterial, she continues to re-define the nature of objects and ultimately human relations to the physical world.

Prof. Martin spent part of a sabbatical year in England in 2008. She was awarded a Visiting Research Fellowship at the Victoria and Albert Museum in London where she studied in their premiere global library and collection. She also received a travel grant from the Paul Mellon Center for Studies in British Art.

She was a Visiting Professor at the Global History and Culture Center, University of Warwick where she lectured, as well as in London and in Venice. In that same year she was elected a Member of the American Antiquarian Association.  A fellowship At the Winterthur Museum followed in 2015.

Her research expertise was called on for historical set design (ceramics) in the film production The Underground Railroad, from a Pulitzer prize-winning novel by Colin Whitehead and directed by Oscar winner Barry Jenkins in an Amazon short series (premiered, June 2022). She also served as advisor on new media design for the exhibition, “Within These Walls,” at the Smithsonian Museum of American History.

Service
Professor Martin was the leader in creating an interdisciplinary campus focus for the study of material culture. Scholars and students came to the Material Culture Group from departments in the arts, humanities, social sciences, technologies and design in four Colleges. They were joined by other museum and history professionals in Madison.

A core group of faculty emerged to develop a specialized certificate degree in Material Culture Studies for undergraduates to add such study to their majors. Graduate students could earn a certificate or take a minor field in material culture in their doctoral studies.

Following the creation and funding of the Stone Professorship, the Chipstone Foundation continues to be critical to these successes. Professor Martin worked closely with Executive Director Jon Prown. His own masterful vision led to generous and innovative ideas and funding to the study of material culture at UW.

Her vision for material culture on campus was also bolstered with other significant alliances and gifts.  Partnerships with the Kohler Foundation provided annual support to twenty graduate students to learn conservation and collection management in art projects. Other donors including the Caxambas Foundation that supported more than twenty undergraduates with paid summer internships with local historical societies and other institutions. The Mellon Foundation awarded funds for seminars to train faculty in material culture method and theory. In all, Martin mentored dozens of students and was instrumental in raising nearly a million dollars in funding for the Art History Department and the Material Culture program.

As part of the campus material culture programming, she led the Material Culture Focus Group, one of a handful of student organizations in the nation dedicated to interdisciplinary material culture scholarship. Student programming was varied and creative and included organizing the annual Midwest America American Studies Conference in Madison, producing a craft symposium to study making, and inviting award-winning artists, filmmakers and production designers for workshops and lectures. They even practiced material culture fieldwork by documenting a traditional UW tailgate party.

Professor Martin’s leadership in Material Culture studies has helped ignite multiple state-wide material culture projects that digitally gather objects, texts, and interpretive models. She helped develop Wisconsin-101: Our History Through Objects, now a statewide collaborative digital museum project in the history department to tell short stories of Wisconsin’s past through objects. She encouraged student content, often for class assignments, and served on the Editorial board.

Partnerships between the Material Culture Program and Chipstone Foundation shaped and supported two other important digital resources.  Graduate student research into local decorative arts directed by Prof. Martin formed the nucleus of the Wisconsin Decorative Arts Database. Now working in cooperation with the Wisconsin Historical Society, the site documents more than 1,000 examples of Wisconsin’s material heritage from the collections of dozens of museums, historical societies and private individuals.

Particularly led by the passion of Jon Prown, the Material Culture program and the Chipstone Foundation partnered with the Kohler Art Library to create the Digital Library for the Decorative Arts and Material Culture. Created with the UW-Library system the site collects and creates electronic resources for study and research of the decorative arts, particularly focusing on early America.

Martin also provided broad service to governance and advising.  She served on important departmental committees—including Graduate Admissions and Financial Aid and Personnel, Merit, and Budget, as well as faculty hires. For the campus, she served on the Research Funding committee, Graduate School, 2009–12; Student Appeals Committee, 2006–11; and Steering Committee, Comparative United States Studies, 2010–15. Beginning in about 2016, her service to the School for Human Ecology in support of the Material Culture Program quickened, ultimately to build the Center for Design and Material Culture. She retired as the Founding Faculty Director for Material Culture there.

She represented the University as exemplary faculty on several occasions. In 2018, she was awarded a University of Wisconsin Community Partnership Award for her multi-year engagement with the Mount Horeb Historical Society to produce the exhibition and publication Creators, Collectors, & Communities: Making Ethnic Identity Through Objects. In the first UW publication Fueling Discovery in the Wisconsin State Journal 2016, Martin was highlighted to the public as an important scholar whose research “promotes understanding of the human condition and/or physical world.”

Finally, early in her tenure at UW, Martin was one of three faculty members selected to represent Faculty Excellence at the UW–Madison Weekend Away with Chancellor Wiley in 2004. She was asked to address the Bascom Hill Society Spring Showcase Series in March 1999.

“‘Open the Mind and Close the Sale’: Consumerism and the Archaeological Record,” in Material Worlds: Archaeology, Consumption, and the Road to Modernity, edited by Barbara J. Heath, Eleanor E. Breen, and Lori A. Lee, 282–90 (New York: Routledge, 2017).

“Scottish Merchants: Sorting out the World of Goods in Early America,” in Making for America: Transatlantic Craftmanship: Scotland and the Americas in the Eighteenth and Nineteenth Centuries, edited by Vanessa Habib, Jim Gray, and Sheila Forbes, 23–44 (Edinburgh: Society of Antiquaries of Scotland, 2013).

“Mirrors,” and “Ribbons,” in World of a Slave: Encyclopedia of the Material Life of Slaves in the United States, vol. 2, edited by Martha B. Katz-Hymen and Kym S. Rice, (Santa Barbara: Greenwood, 2011).

“Ribbons of Desire: Gendered Stories in the World of Goods,” in Gender, Taste, and Material Culture in Britain and North America, 1700–1830, edited by John Styles and Amanda Vickery, 179–200 (New Haven: Yale University Press, 2006).

“Tea Tables Overturned: Rituals of Power and Place in Colonial America,” in Furnishing the Eighteenth Century: What Furniture Can Tell Us about the European and American Past, edited by Dena Goodman and Kathryn Norberg, 169–82 (London: Routledge Press, 2006).

Primary Investigator, A Colonial Merchant: The Ledger of William Ramsay.

Teaching
Professor Martin came to the Art History Department as the new Stanley and Polly Stone Professor and Chair in 1998.  She has since taught courses investigating two and a half centuries of American interiors and objects of art, craft, and commerce, always seeking to connect to student lives and experiences.

Her second main area of teaching was in exhibition practice and museum studies. Ten successful exhibitions and related programming resulted from this intensive experience: seven were held at the Chazen Museum of Art or other UW locations, two partnered with local and regional institutions. One class project became part of the permanent exhibition American Enterprise at the Smithsonian Museum of American History.  Several resulted in published catalogs and articles. She and her students’ last exhibition demonstrated how slavery could be uncovered in a campus art museum’s collection.

She valued high-impact teaching, often outside of the classroom, which included demonstrating materials and processes for making ceramics. silver, glass, wood, and textiles. Her students might take behind the scenes tours of exhibitions at major museums, or tour private homes of significant collectors. A favorite experience in her decorative arts classroom occurred when a renowned baroque bassoonist played period music, passionately described making his own wooden instrument on a lathe and helped lead a discussion with the students on what is “baroque.”