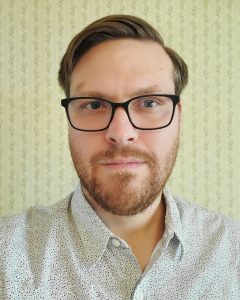 Biography
I am a scholar of 20th and 21st century art, with a focus on Western Europe in the post-World War II era. In the broadest terms, my work addresses the entanglement of modern artistic strategies with the emergence of capitalism as a global economic and social order.

My first book project is a study of the 20th century German artist Joseph Beuys. Here I argue that Beuys’s work represents a sustained though problematic working-through of transformations in the postwar West German welfare state at the cusp of the neoliberal era. My second book will expand upon these themes by considering a wider range of artists in postwar Germany whose serialized approaches to mark-making I correlate with gendered and racialized shifts in the Western European labor market in the 1960s and ’70s. Although my research is anchored in this period, I have a strong investment in tracing back genealogies of recent art to much earlier moments of crisis and critique, such as the moment of Romanticism at the turn of the 19th century. At present I am also expanding my research and, especially, my teaching to reflect recent work in the field of global modernist art history.

A further area of my research is the historiography and methodology of art history, with an emphasis on the German intellectual tradition during the late 19th and early 20th centuries. I am a founding editor of Selva: A Journal of the History of Art, an online peer-reviewed publication dedicated to the study of past models of art interpretation, with a particular emphasis on “radical” approaches to art history and criticism. Our aim, per the journal’s mission statement, is to “channel the study of art towards a more urgent engagement with our current state of crisis, both within and without the academy.”

“Greenberg avec Mao: Supports/Surfaces and the Specific Contradiction of Painting,” Selva: A Journal of the History of Art 1 (Fall 2019):91–114.