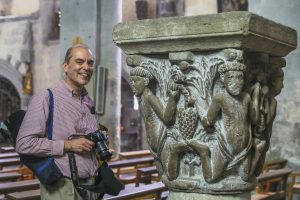 Additional Titles
Simona and Jerome Chazen Distinguished Chair of Art History (2022–2027); Affiliate of Italian Studies in the Department of French and Italian; Affiliate of Religious Studies, The Division of the Arts, and CREECA

Biography
A graduate of the University of Toronto and the Johns Hopkins University, Prof. Dale taught at Columbia University in New York before joining the Art History faculty at UW-Madison in 1999. In his research and teaching, he explores how medieval art and architecture of Europe and the Mediterranean basin offer primary sources for understanding religion, politics, rituals, and cultural interaction. An essential premise of his approach is the recognition that the efficacy of visual culture and architecture lie in their forms, materiality and engagement of the spectator. He firmly believes that the cultures of the Middle Ages offer crucial insights into current ideas and concerns, ranging from the power of material images (and iconoclastic destruction) to globalization and racism.

His current book project focuses on cultural exchange and race in medieval Venice.

“The Monstrous,” in A Companion to Medieval Art: Romanesque and Gothic in Northern Europe, 2d. ed., edited by Conrad Rudolph, 357–81 (Hoboken: Wiley-Blackwell, 2019).

“The Nude at Moissac: Vision, Phantasia, and the Experience of Romanesque Sculpture,” in Current Directions in Eleventh- and Twelfth- Century Sculpture Studies, edited by Kirk Ambrose and Robert A. Maxwell, 61–76 (Turnhout: Brepols, 2010).

“The Monstrous,” in A Companion to Medieval Art: Romanesque and Gothic in Northern Europe, edited by Conrad Rudolph, 253–73 (Oxford: Blackwell, 2006).

“The Individual, the Resurrected Body, and Romanesque Portraiture: The Tomb of Rudolf von Schwaben in Merseburg,” Speculum 77 (2002):707–43.