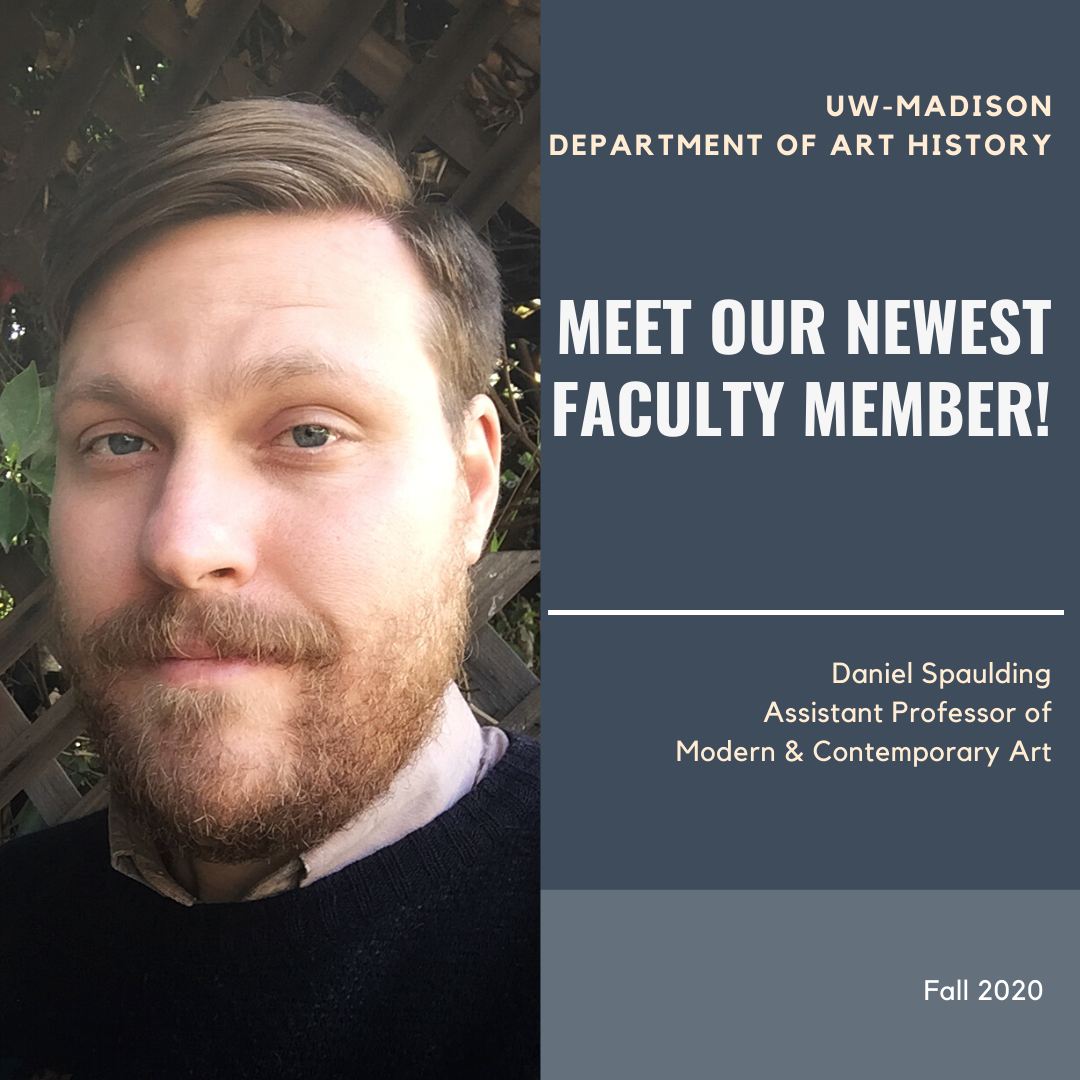 2020 has been a rough year, but we are excited that Professor Daniel Spaulding will be joining the Department of Art History as an Assistant Professor of Modern and Contemporary Art this fall semester. His area of research spans the 20th and 21st centuries, but he is particularly interested in post-WWII German art as it pertains to the economy and society with the development of capitalism in West Germany.

Prof. Spaulding became interested in art while growing up in southern California. His parents would often take him to Los Angeles area museums on the weekend. It was these early interactions that planted the seeds of wanting to learn more about art history that blossomed during his undergraduate career at UC Berkeley. Greatly influenced by his professors Anne Wagner and Tim Clark, Prof. Spaulding believes that it is really important to be a faculty mentor to undergraduate students and intends to make this a top priority during his time at UW–Madison.

This fall, Prof. Spaulding will be teaching a contemporary art survey titled “Interpreting Contemporary Art.” He intends to shake up the movement-based narrative and offer a look at contemporary art through keywords, such as “intimacies” and “repetition.” Additionally, he is prioritizing what the art world and art history looks like from the global south, which is often left out of traditional art historical narratives that focus on the Western world. If we were not currently dealing with the Covid-19 pandemic, Prof. Spaulding stated that he would have incorporated artist studio visits into his course so that students can see a variety of artists’ approaches and their workspaces. He hopes to be able to work these “field trips” into in-person classes in the future.

A founding editor of Selva: A Journal of the History of Art, Prof. Spaulding is also fascinated with historiography or the history of art history. The upcoming issue will explore the role of right-wing art history. In general, this issue will look at art historians who pushed their own right-wing political agendas through their scholarship. This type of political influence on art historical scholarship infamously occurred within Nazi Germany, which worked to promote their racialized agenda against Jews and other “degenerate” artists.

Currently, Prof. Spaulding is working on a forthcoming monograph about 20th century German artist Joseph Beuys. He intends to take a different approach to the work of Beuys and the role of the artist’s mythmaking. This mythmaking will be extrapolated to the post-war capitalist economy, showing how Beuys used myths about his art to explain capitalism and modernity.

While this year has been a strange one, we are elated that Prof. Spaulding will be joining the UW–Madison family and look forward to what he will bring to the history of art.