Position title: Chair of the Department of Art History, Professor 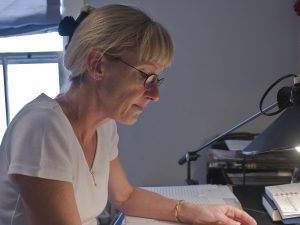 Biography
I am a Professor and Torger Thompson Chair. I currently serve as chair of the Department of Art History. I am a native of Denmark. I received my M.A. and Ph.D. degrees in Scandinavian languages from University College London and my B.A. Hons. in Icelandic and Norwegian at the University of Iceland. I joined the Department of German, Nordic, and Slavic+ in the fall of 2001, where I teach a variety of courses on Old Norse-Icelandic language and literature and Scandinavian linguistics. I have published several books. The most recent are Vikings: An Encyclopedia of Conflict, Invasions, and Raids (with Tristan Mueller-Vollmer) (2022), Saints and their Legacies in Medieval Iceland (ed. with Dario Bullitta) (2021), and the 6-volume A Cultural History of Color (2021), of which Carole P. Biggam and I served as co-general editors and edited the volumes on Medieval and Enlightenment. I am currently putting the final touches on The Priest’s Eye: AM 672 4to in the Arnamagnaean Collection, which is to appear in the series Manuscripta Nordica: Early Nordic Manuscripts in Digital Facsimile. In addition to books, I have translated a number of Sagas of Icelanders into Danish and published approximately 90 articles on a variety of topics within the field of Old Norse-Icelandic, including editions of religious texts, non-verbal communication, gender dysphoria, color terms, and illnesses.